So I went into this weekend with a loose outline of things I wanted to do and accomplish.  I found that challenging to do.  Saturday morning I hit the track again after a two week hiatus.  I still have been having some persistent aching pain in my knees that I hoped some rest would fix.  It has not thus far so I decided to run anyway.  The first lap or two I could feel the pain but it subsided as I warmed up.  The warm and humid air made the 3.4 miles feel like a struggle.  My pace was slower than my recent best.  It took me about a minute longer to complete the distance.  Not having Cindy there definitely slows me down.

So when I got back I started on normal stuff.  Although the grass was probably high enough to mow again we decided to put it off until Wednesday since we are both off that day.  I am taking the day off for the gutters to be installed on the house.  So after getting the first round of chores done outside we hopped in the truck to run errands which included stops at DD,  Home Depot, JoAnn Fabric, Petco, Lowes and Costco.  Yea it was a bit much. 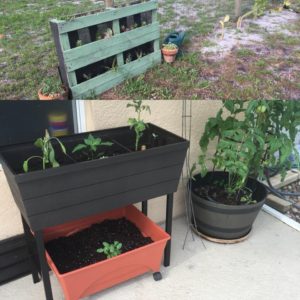 While we were at Home Depot I couldn’t find what I was looking for, an adjustable screen insert (more on that later), but we did wind up buying something spur of the moment, a raised patio garden box.  I have talked many times about how hard it is to grow things here successfully in the summer.  The biggest problem is insects destroying the plants.  We are hoping by setting this up on the lanai we can finally grow something to fruition in the summer.  I was considering building something along this same design but when the opportunity came to just buy it I took the easier option.

So the reason I was looking for a screen insert was because I was trying to come up with alternative power options for Cindy’s RV.  Currently we have it connected to the same outlet that is used to power the 110V water equipment as well as coop power.  The circuit does not have enough juice to run the RV air conditioner consistently.  I am concerned about moisture/heat causing issues inside the RV so I had been trying to come up with a way to get more power out there.  My idea was to tap an outlet inside the guest bedroom. 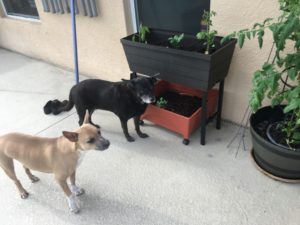 By using the screen insert and a lot of weatherproof tape to seal the rest of the screen, my plan was put into motion.  I meticulously prepared the insert and then connected four extension cords together to stretch out to the RV.  I plugged in the cord on both ends and excitedly told Cindy to flip on the AC.  Well the AC ran for a few seconds and then turned off.  Yep, it popped the breaker.  I tried a few more times, hoping it was a fluke.  Nope, the circuit popped every time.  It actually did worse than the line it was on before.

The line in the house is a 15 amp circuit, the other circuit for the well equipment is 20 amps.  I thought having a 15 amp circuit with less contention would be the winning combo but I was mistaken.  I dejectedly undid all of my work and swapped the RV back to it’s original power source.  I really thought I had a viable solution but things don’t always work out as planned.

During Saturday afternoon we got absolutely SMASHED with rain.  I estimate we got close to 3 inches of rain in roughly 90 minutes.  The end result was standing water quickly forming in it’s usual locations.  Luckily the ground was still able to absorb it and by the next morning the water was gone.  This will not be the case for much longer.

Saturday night we watched the latest Netflix disc, Valerian City of a 1000 Planets, a sci fi movie based on a popular book I never read.   It was a very odd, random movie with really incredible visuals.  They must have spent a ton in production costs but unfortunately the end result was a B level movie, at best.

Sunday morning my to do list was still unsatisfied.  We picked up Sadie during the morning for another extended stay which Elsa was thrilled with.  It’s funny how Ali’s place is the only other location where Elsa immediately relaxes and feels comfortable.  Within 60 seconds of arrival she is already up on the furniture snuggling with Ali and Shugs.  We headed to Rural King afterwards to grab some chicken supplies.

During the afternoon I tried to address some of my remaining to do’s.  One of them was trying to salvage a pull cart we bought from Home Depot no more than two years ago.  It’s frame was evidently constructed out of some very low grade steel and is badly rusted, so much so that the part that connected to the handle snapped off.  This happened a few weeks ago and I had been hoping to come up with someway to extend the life of the cart at least a few months.

I first used a paint/rust stripper attachment on my drill to peel away as much of the rust as possible.  I then sprayed the areas with a rust inhibiting primer/paint.  I then reconfigured the handle layout, mounting the bracket further back and in a 90 degree different orientation than it originally was.   I then cut off the rusty remains of the mount with my Sawzall.  The new setup is not perfect but functional.  The entire time I was doing the work I felt frustration that the $130 “Gorilla Cart” was built so poorly with cheap materials.  When my rig job finally fails I won’t be buying one of their products again.

Cindy had been doing a lot of organizing and cleaning up in the latter part of the day, especially in the guest bedroom.  Later in the evening I helped her with some finishing touches including hanging a couple mirrored window frames and a picture to fill dead spots on the walls.  The room, which had become sort of a dumping ground, looks 100% better now.

As I mentioned earlier I have a weird split week with taking off on Wednesday.  I am sure I will spend a good portion of that day off getting done what needs to be done.