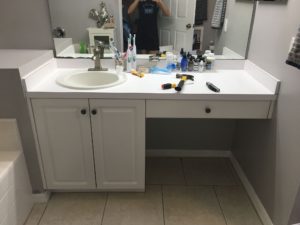 for some reason I have failed to mention a project that we started a few weeks ago when we ordered a new vanity online from Costco.  For a long time Cindy has asked about putting a double vanity in the bathroom (and Ali before her).  I had resisted all this time for a very logical reason, the amount of times that our schedules coincide that we need to use the sink at the same time are very, very small.  I didn’t see the need to undergo the hassle and expense of replacing a solution that worked fine 99.5% of the time.

Well I finally relented but I gave Cindy some financial parameters I was willing to work inside of and I wanted her to find someone to do the work inside of those parameters.  I just did not have the time or motivation to take on ANOTHER task at this point.  So we ordered the vanity and it arrived via a freight carrier yesterday, which also happened to be Cindy’s birthday.

So the understanding I had was Cindy’s neice’s boyfriend, who works for a plumbing company was doing the work, all of the work.  Well it turned out he only agreed to do the plumbing and vanity install but not all of the associated work that was required, like making the physical space available.  You see, when the builders did the house, for some stupid reason they made the opening 59 inches, instead of the 60 inches typically required for a double vanity.  So in order to make this work, a small section of the more or less useless “box” behind the tub was going to have to be demo’d and redone. 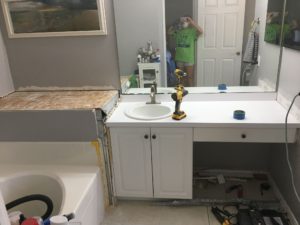 So Cindy looked into the prices of having another contractor do this part of the project but got some ridiculous quotes to do so.  Without my knowledge, she decided to try to do the work herself.  When I came home last night it was to a demo’d bathroom.  She did an impressive job, exposing the top surface, removing the problem drywall, relocating the metal framing, and buying the supplies needed to rebuild it.

She was extremely proud of what she accomplished courtesy of watching videos online and some direction she got from one of the contractors she talked to.  After work Ray and his friend Doug showed up to complete the removal of the old vanity and start on redoing the plumbing to support two sinks. 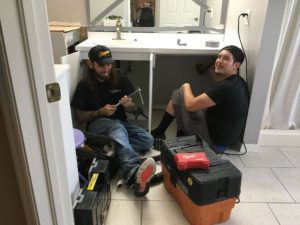 My biggest contribution last night was getting the old mirror popped off the wall, in one piece no less, and prepping a small section of the floor where I will need to insert a small piece of ceramic tile.  The problem is Ray is coming back Saturday to finish the vanity install so all of the prep work we have to do needs to be done by then.  The fact that I have to work late tonight at a branch office makes Friday evening my only window to accomplish this as on Saturday I have to work once again at another branch office for a good portion of the day. 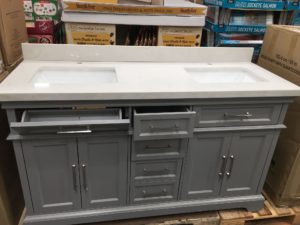 The new vanity is really nice and should make a great addition to the bathroom.  I just feel a lot of anxiety having so many balls up in the air between this project and my work commitments.  As I said a few days prior, hopefully this time next week the crunch should be over and I can get back to business as usual.

This project reemphasized the corners that were cut during the home’s construction.  The corner we are working on is not square and the drywall behind the mirror has a HUGE bow in it.  We never realized that the old mirror on one side was about a half inch off the wall from the wall curve.  There is a lump behind the mirror drywall that Cindy is going to cut into to see what it is.  I guess when they were building houses in three months back in the early 2000’s, quality took a back seat to speed.

So part of the plumbing work required turning off all water to the house for a period of time.  While I was out there I wanted to show Ray the reverse osmosis equipment that is housed in a storage box.  When I pulled open the lid I was stunned as I was attacked by wasps, instantly I felt a burn on my finger and neck.  There was a sizeable nest being built on the underside of the box lid.  The neck sting was particularly painful as it swelled and red discoloration extended down my chest. 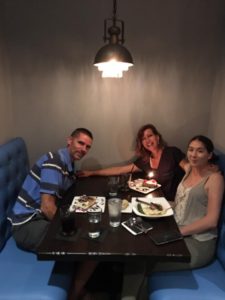 Last night after Ray and Doug left I took Cindy for a late dinner for her birthday at The Warehouse which is only 9 miles from the house.  Katie, who was working joined us for the tail end of meal which was nice.  I felt like a zombie by the end of it.  I am running on fumes this week. I hope the next 72 hours passes by quickly.