Sadie had her follow up appointments yesterday.  Part of it included a full body CT scan which we won’t know the end results of until today but based on the info we have there was a plan of care devised.  The oncologist recommended doing localized radiation treatment in the area of the mouth where the growth was removed from.  Doing so is supposed to kill any remaining cancerous cells in the area and lower the odds of a reoccurrence.  The treatment is twice a week for three weeks. She also will be given a dog melanoma vaccine which has been successful in a lot of cases in preventing a relapse.

Early in the new year she will then have a procedure to remove the growth that is inside her rib cage that is applying pressure to her internal organs.  The doctor said getting it now before it gets very large makes the most sense. It’s a lot of procedures and treatments and I have concerns of how it will all affect Sadie.  Ali was told that the localized radiation should not have major side effects like chemotherapy would.

Of course if the full body CT scan results show something more widespread we could have much more serious issues to deal with.  When I talked to Ali on the phone yesterday I reiterated how lucky we were that years ago we decided to pick up pet insurance on both dogs.  It’s an expensive premium but well worth it in situations like this where insane costs can pile up rapidly, making medical care for your beloved pet not be strictly a financial decision.

Today is my last day of work prior to a last minute extended holiday weekend which will afford me six days off in a row.  I am very much looking forward to having the time open for me to fill as I deem fit.  Of course I already have several large chores on that mental to do list but with 144 hours available to complete them, I should still have plenty of time to do things I enjoy as well. 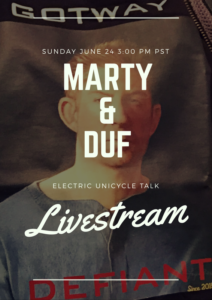 One of those things on the schedule will be my next EUC Livestream on Sunday night.  I got a surprising email yesterday that my co-host on the stream, Marty, suddenly decided he was stepping back from the show and social media in general.  He said he needed to focus his efforts in some other areas.  I didn’t press him for details as it’s none of my business but at least for now I plan to continue on with the bi-weekly broadcast as I have put a decent amount of time and effort getting it out there as well as distributed on three major podcasting platforms.

Doing the show by myself will be different for sure as Marty provided a lot of the subject matter we discussed.  I will need to do more of that legwork myself.  On the plus side I will be able to more easily talk about my other electric vehicles like the One Wheel and electric skateboards.  Since Marty did not have or ride either of those I always felt it was a bit awkward for me to talk about either in depth.  Cindy may or may not add some spice to the broadcast as well, the people that watch live always seem to love when she is involved.

See you in a week.