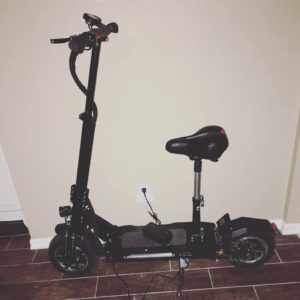 For the past couple years during the winter I have ridden my EUCs to work just to say I could.  I first did it with my Msuper and barely made it, coasting into the office on fumes.  Last year I did it on my big Gotway Monster which has a much bigger battery, it was able to cover the distance without issue.  This year I decided to give it a go on the newest PEV in the fleet, the Ultron Ultra.

I did one long ride with the Ultron out to Ave Maria and did not have a good end result.  I wound up pushing it for more than three miles of the 30 mile ride.  I overestimated how much battery range I would have and drove very aggressively on the first half of the ride, traveling 30 mph for most of it.  I used that experience to come up with a different plan for today’s ride.

I had the scooter on the charger all night to make sure I had max juice before I shoved off a little before 6:30 AM.  I was fully geared up with wrist guards, full face helmet, elbow, and knee pads, as well as my safety vest.  I also had on a hoodie since it was 58 degrees and the chest mount for the GoPro to capture the ride.  I then threw my backpack on as well so I was loaded up pretty heavily.  Of course Cindy was worried as always.  To be honest I had a bit of an unsettled feeling as well since just this week someone in our area was killed on a bike, in the bike lane, when an idiot driver veered into the lane (surely texting) and hit them.

So my plan for the ride was pretty simple, keep my speed down to extend my battery life.  I was cruising 20-21 mph which actually feels sort of slow on the scooter which is my normal cruising speed on an EUC.  The one thing that is annoying with this scooter, compared to Cindy’s Dualtron is the cruise control does not work.  This means I have to keep constant steady finger pressure on the accelerator hand trigger which can be tough to do.  The bright headlight, tail light, and color cycling side LEDS make the scooter very visible in low light conditions which is helpful. 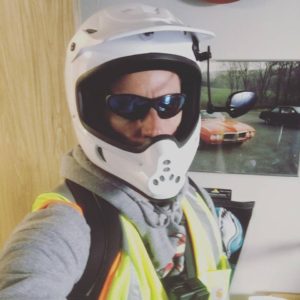 I was anxiously watching the battery meter as I progressed.  At one point it seemed like it was dropping faster than I expected but it settled down.  I wound up getting to the office with two of the five battery indicators intact so I had juice to spare.  I immediately threw the scooter on the charger so I can once again be topped off for the ride home this evening.  It’s reassuring knowing that I have some wiggle room in battery capacity as long as I don’t keep the pedal to the metal.

This weekend I have a lot of mowing on the mind.  After I change the oil and filters on the tractor I plan to put it to work hard core.  The front and back yards need to be mowed as well as weed whacked.  I expect the combo of the three things to consume the majority of my Saturday.  Saturday night we are going to get out to see Captain Marvel and then Sunday evening I have my bi-weekly live stream.  It’s going to be a very busy weekend for sure but it’s better than being a sedentary, lazy, unmotivated sloth.