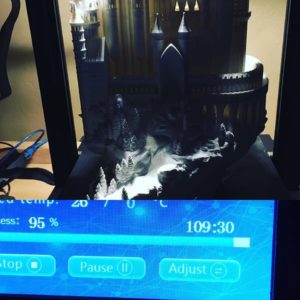 So I have been printing my largest and most detailed model ever all week. It’s a massive castle with incredible amounts of detail that has already consumed one complete 1KG roll of filament and is chewing through another.  Last night I had to do the filament swap which I was nervous about.  I tried printing this model the first time last weekend.  When I tried to swap filament that time I messed up the print head position which made it impossible for me to resume.  Luckily this time I got it changed without incident. Cindy is very much looking forward to getting the opportunity to paint this massive model which will be a huge project in itself.  Depending on how much detail she does, this thing could be a genuine piece of art by the time it is complete.

Cindy and I have been watching Leaving Neverland, the HBO documentary about Michael Jackson and his pedophile tendencies.  If you ever had any doubt that Jackson was a habitual child molester, those doubts will vanish after watching this two part series.  It’s just another example of how these famous people are propped up and insulated by money, buying silence and cooperation to keep the curtain of deception intact.  Our president is another unfortunate example of the same practices, thankfully I don’t think he has any pedophilia hiding in his massive, gold plated closet of secrets.

So I believe I made mention of Luke Perry’s death a couple weeks ago.  The former 90210 actor died after complications of a massive stroke.  He was only 52 years old, less than a year ahead of me.  Anyone that has read this blog for a long time knows my hang ups about aging and death, I just don’t want to deal or think about either.  When my mom died at the relatively early age of 67 we had to work through the process of handling her estate which was tough since mom never gave me power of attorney, something she talked about doing for a few years but never happened.

Mom’s death gave me the push to do some estate planning, sort of.  I bought Quicken Will Maker maybe a year after she died.  I then waited another year or more until I actually installed the software and generated a will, power of attorney, living will, and health care advocate documents.  Then another year has passed but yesterday, partially thanks to Luke Perry, I actually signed and got these documents notarized so they are official.  I scanned and sent copies off to all parties mentioned, hopefully never having to be used.

I don’t just have Luke to thank for taking this final step.  My ongoing health issues that started last summer have made me think more about the need for this to get done.  If I join the ranks of the “drop dead out of nowhere” club, I certainly want to make sure that my affairs are in order.  I still don’t feel normal and that concerns me.  It concerns me enough that I am arranging to revisit the med clinic after my second chest CT next week to look more into the calcification on a coronary artery that was mentioned during the first scan. For some reason this was viewed as a minor finding, which I don’t get.  The way I feel when doing higher exertion activities, where my energy level seems to plummet feels like a symptom of a possible partial blockage somewhere.  I am going to push for whatever testing there is to try to figure it out.

This weekend I have plenty to keep me busy.  It will be the calm before the storm of next weekend which is Katie’s baby shower.  The amount of planning and prep Cindy has put into this is nothing short of staggering.