I don’t even remember where I left off.  Sunday morning I went to the birth center with Cindy.  Originally Katie and Daniel were told the baby couldn’t go home until Monday but that schedule got moved up a day, meaning they could come home Sunday.  After hanging out there for awhile and grabbing some of the stuff to take back to the house we left them and the baby as they had to jump through some more hoops before getting discharged.

Katie’s dad and his family came to the house to hang while we waited for Katie, Daniel and the baby to arrive.  They wound up waiting much longer than expected as there was a delay getting out of the birth center.  When they did arrive baby Daniel was passed around like a precious commodity, everyone loved holding him.  Before I knew it my Sunday had expired, the five day weekend was flying by at warp speed.

So I had heard nothing from the Tesla service center since dropping the car off on Thursday, despite being told that I would be notified of progress/completion.  So Monday morning I call them asking what is up with the car.  “Oh it’s done”, ok nice of them to let me know.  I asked them if they could verify that the paint looked good as I did not want to drive across the state only to see there was an issue.  A service advisor checked and called me back, saying everything was good.  I told her I would hop in the car and be  there in a couple hours.

The drive back across the state in the Model S loaner was uneventful but I did find myself missing autopilot to make the mind numbing highway miles less so.  When I got there I did not see my car in the lot, I later found out it was parked around back.  When the service advisor pulled the M3 around the first thing I noticed was how dirty the car was on the outside, followed by how dirty the floor mat was as well.  He apologized for the car being dirty.  He said the city of Dania Beach made the service center shut down it’s outside car wash.  Um ok, I guess they made them shut down putting paper mats on the floor mats too. 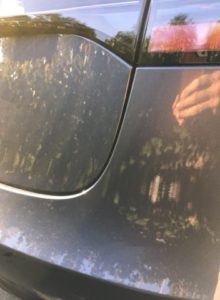 The dirt was only a minor annoyance, I was most concerned about them fixing the paint run near the trunk lid.  Once I brushed some of the dirt off I verified that things looked good back there, thank goodness.  The service advisor handed me my key card and headed back in.

When I turned on the car I saw another thing to get annoyed about, they neglected to put any more juice into the M3 after I dropped it off so I needed to charge before returning home.  Maybe I am assuming too much that they would proactively charge the car.  The bright side was this was an opportunity for me to do my first supercharging of the Tesla, which I have been wanting to do. 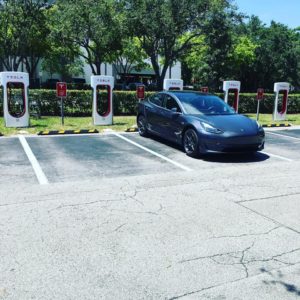 The closest supercharger was less than 10 miles away.  I figured I would go there, hook up, and then grab lunch while it charged.    Supercharging was stupid easy.  Back into the spot and plug in.  The charge rate is ridiculously fast compared to home charging.  However it limited me to charging to 80% because it was supposedly a busy charging station, despite 80% of the spots being available.

So as I walked towards the shopping center I tapped my pockets to make sure I had my wallet and phone with me.  I felt the phone but no wallet. Hmmm.  I went back to the car thinking it must have just fallen onto the seat.  When an exhaustive search revealed nothing, the ugly reality set in, it’s probably in the loaner car.

I did have the wallet out to pay for my coffee on the way and I didin’t recall jamming it back into my pocket.  I called over to the service center and after an anxious minute or two they verified my wallet was indeed still in the loaner.  They kept it out front for me.  So I waited roughly 25 minutes for the car to go from 43% to 80% charge.  I then backtracked to the SC, grabbed my wallet and THEN stopped for lunch at a dumpy Subway.

It felt good to be back behind the wheel of the M3 and I used the autopilot for the majority of the drive home.  Of course I documented the experience.

I didn’t get home until early afternoon.  By the time I was done editing video it was later in the afternoon.  I headed outside to wash the very dirty car.  It looked great once it was clean.  I am hoping I can get around to just enjoying it now instead of worrying about repairs looming overhead.

This morning I dropped the car off for a non-repair item, window tint.  Tinting your windows is a near requirement in Florida.  The brutal sun bakes the interior of your car without it.  I am opting for the top of the line ceramic stuff which is very pricey but I plan to have the M3 for a long time, it’s an investment that is worth it. 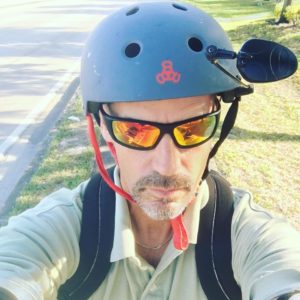 Instead of bothering someone to pick me up to go to the office I threw my KingSong 18L in the trunk.  After dropping off the car I one wheeled it the roughly three or four miles to the office.  It was mostly bumpy sidewalk riding the entire way which is never fun, especially navigating around pedestrians and bike riders.  I got a call the car is already done so I am debating to ride back or get someone to take me.