Yesterday I had two medical appointments in the same day, a sure sign that you are old.  In the morning I had my check up at the dermatologist.  There is a spot on my back that has a very dark mole but it has not been changing in appearance.  He said he could biopsy it to make sure it was nothing.  I told him I would rather address it at my next 6 month check up as I have already burned through my medical budget for the year a long time ago.

In the afternoon I was at the employee med center to go over the results from my latest round of testing.  The NP I normally deal with was out sick so they had a female doctor filling in for her which was a bit of a bummer since she was not that familiar with my history.  The thallium test showed my level dropped a tenth from .5 to .4, just below the warning level.  They also did very thorough cholesterol screening to see if a statin would be a good idea.  The short answer from the test was probably not.

The thing I was not that thrilled about was for the first time in my memory my overall cholesterol crossed the 200 mark (208).  It’s been below 200, at times well below 200 forever.  I think part of that is less strictness in diet during the last couple years which is something I told Cindy I would like to work on.  I basically eat whatever she puts in front of me.

I also told the doctor about the right side pain thing that has been going on forever.  She had me lay down on the table and started feeling my hip bones.  She then had me go through some movements where I would press against her resistance with my knee in a way designed to stretch the hip.  She even yanked hard on my right leg while I held onto the table.  It felt almost like a mini-chiropractic session.  As she went through the manipulations she would keep feeling my hip bone on the right side, she could feel the unevenness compared to the left.  By the time she was done she said it felt more aligned and my hip did feel better as well.  I am going to see if I can find a way to do these stretches myself.

I actually enjoyed getting the doctor’s fresh perspective on things.  I don’t have any defined next steps as far as my health goes except for more wait and see.  The off and on fatigue that has been part of my life for the last year has been more off than on lately.  When I do feel the fatigue it does not seem as severe as it once was or perhaps maybe I have just adjusted to my new normal.

Last night I revealed to Cindy an idea I had been rolling around in my head for a few days for a future home improvement, enclosing the covered portion of the lanai.  The 8′ x 16′ space could be turned into either a sun room or a more conventional room pretty easily which would add space to the house and a new feel.  I have no idea of the costs to do so but Cindy was very excited by the prospect and immediately started researching things.  There are a ton of different things to consider with cost being a primary one.  I would be paying someone to do most of the work but Cindy and I would be able to do finishing items.

I also have an appointment with a solar company on Monday to just give me some numbers regarding whole house solar.  There are tons of incentives and plans available that can get solar into your household, it’s just a matter of how much of that cost you want to absorb yourself versus direct cost savings you can expect.  The average return on investment for most solar installations is 10-20 years, that’s a loooong time to wait but if I am retired with no electric bill that could be a nice scenario.  There is some advantage to doing this now as I believe a large federal incentive for solar goes away at the end of this year. 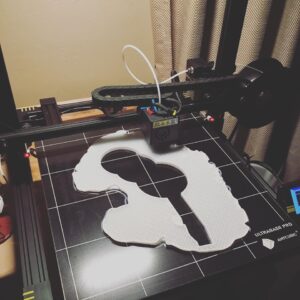 Last night I started what would be my biggest and longest print ever.  If it completes, the print will consume nearly a solid week of printing.  The odds of prints that long completing without incident is not great but if it works, it will be awesome.

So Nancy Pelosi finally relented to mounting pressure and formally announced the commencement of impeachment proceedings against Donald Trump, something that feels like it has been talked about for a couple years.  She has resisted doing so for political reasons, keeping her eye on the big goal of kicking Don out of the White House in 2020 but I guess the latest abuse of power regarding Trump leveraging foreign aid to Ukraine in reward for dirt on Joe Biden’s son enraged enough democrats that Nancy was now in the clear minority.

I would like to say I have mixed feelings about this but to be honest, I don’t.  I am a realist, a greater good, and a big picture guy.  My hope is to have someone else be president in 2020 and to me, this is counterproductive to that goal.

Everyone knows that impeachment has zero chance of actually occurring.  The senate and the supreme court are both stacked in Trump’s favor.  A president has NEVER been impeached.  Andrew Jackson and Clinton were the only ones brought up on impeachment but both men were able to stay in office.  Doing this gives Trump a huge political football to throw around, further crying wolf about fake news and how democrats constantly attack him, unjustly. (in his distorted self reality)

I do understand the reasoning behind the democrats finally pulling the trigger.  Trump’s abuse of power as president has been unmatched in my lifetime.  His outright refusal to acknowledge congressional authority is staggering but so numerous that it has become a shoulder shrug event over the last three years to much of the public, including myself.

The impeachment proceedings are an attempt to wake the country up and not cast democrats as the party that allowed Trump to walk all over the Constitution while they stood by complaining and doing little else.  This impeachment announcement is without a doubt action instead of words, I can only hope it doesn’t further galvanize the blind loyalism that has infected a terrifying amount of people in the Republican party.