On Saturday after doing normal duties I got out the branch loppers and went to town.  My goal was to do all of the tree trimming that did not require ladder work.  My thought was doing this would cut down on the misery of the full scale tree trimming that has to happen before Thanksgiving.  It took longer than I anticipated and thank goodness Cindy was helping me else it would have been much longer.  In total I trimmed around a dozen trees which should help cut down the work in a few weeks. Saturday night I paid the price for the work.  Somehow all of the lopper work made my right thumb incredibly painful, almost as painful as when I had gout several years ago.  I could not grip anything, it hurt that much.  Luckily the pain has been fading and I have near normal use of the joint today.

Saturday night we saw Rambo Last Blood, which as the name suggests, is the final of the Rambo series, which I have always been a big fan of.  At first glance it might seem sort of nuts that a 70 year old Sylvester Stallone could still pull off the role but he absolutely did, although his shirt remained on the entire time.  There is one disturbing thing you notice about modern day Stallone which is a side effect of his years of well documented use of HGH, his head is huge, much bigger than when he first played Rambo.  One of the side effect of growth hormone is parts of your body grow, not just your muscles.  Head, feet, ankles, and wrists all can grow while on growth, which is sort of scary. Anyway, the movie had all of the action and incredible violence Rambo movies are supposed to have, backed up by an intense revenge plot which makes it all fly.  I enjoyed the movie for what it was,a B+ effort for sure.  Nothing beats the second Rambo movie.

Sunday morning Cindy and I went for a fun ride at the Greenway.  Once again we rode into some PEV riders, this time on One Wheels.  Once again they knew who we were from the YouTube channel which was funny.  We rode all the way to the beach and then some, it was a good time for both of us. 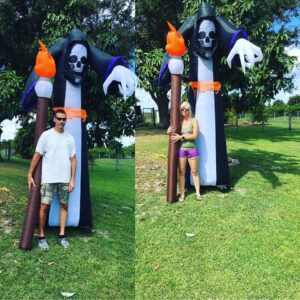 During the afternoon we put out our Halloween decorations which now include a huge 12 foot tall Grim Reaper.  A lot of our decorations somehow wound up with black mold/mildew on them and had to be tossed.  Cindy cleaned up what she could.  We have one more inflatable to add to the collection that Cindy picked up today.  It may seem like a waste of effort to decorate for a holiday where a child has not come to the door for trick or treating in the last 10 years.  But, it makes this 51 year old child happy, so we do it anyway.

I stayed home this morning to meet up with a guy for a whole house solar estimate.  I saw the company advertised in a home improvement magazine.  I was aware that the the 30% federal tax credit was supposedly expiring at the end of this year so I figured it would be smart to at least get some numbers so I can think about the viability of it.

As soon as the guy walked up I saw him looking at the roof.  I told him right away that I don’t want to fill my brand new metal roof with a bunch of holes and I would be looking for a more expensive ground mount option.  I presented him with my latest electric bill so he could properly size a solar system that would result in a net cost of zero from LCEC.

The system he quoted was something like 48 panels and 14.8 KV if my memory is correct.  Choosing a ground mount adds a good chunk of change to the install, roughly 6K.  The total quote was, hold your breath, $55,000, yes, the number made me pause a bit as well, I was thinking more in the lower to mid 40’s but the ground mount does change the math somewhat.  So the good news in the scenario is that federal incentive refunds 30% of that cost so I would effectively be financing about 38-39k.  If you use their financing with a 15 year loan at 2.99% the payment came out to around $275 a month which is an amount I already have budgeted for my electric bill.

The guy stressed that there are some things that his company does that others do not, starting with using top grade panels with a 25 year warranty.  He said some companies throw out panels with half the rated lifespan.  He also said all of the work is done by their employees, nothing is sub-contracted out, which I like as well.  I still told him that the overall number still seemed high and that I would want to get some other estimates to compare against.  He said that he might be able to work the numbers more and he would get back to me.

Even with that huge overall number, which I expect to only go down as I go further into this process, there is a clear motivation as to why I would do this.  My quick thought process on whole house solar used to go like this.  All you are doing is trading an electric bill payment for a solar power loan payment, what’s the point?  I now realize that that is exactly the point.

Instead of handing that money over to the utility company, which benefits you exactly zero dollars, you can spend similar money towards a major home improvement that drives up the value of your house substantially.  In my situation I would see myself paying off the loan far in advance of the 15 year term but whenever that happens, your value equation just keeps improving from there.  I am considering this much more seriously now, we will see if we can get some lower numbers that make that equation even more favorable.