A good portion of the three day weekend was spent doing all of the work required to clear four rooms in the house for carpet restretching.  The carpet guys had their work done in about an hour, between Cindy and I we spent 12-15 hours doing all of the required work to prepare and recover.  Home Depot has very clear instructions on what you need to do properly prep the room, basically EVERYTHING comes out but the up to six furniture items per room that they will move.  However those furniture items need to be cleared of any items as well.

The clearing work resulted in a bag of trash and several boxes of donated items.  Overall it was a positive experience as not only do the rooms no longer have raised ridges in the carpet, we also got to use better judgement when filling them back up.   I wound up having four or five left over power strips that I no longer needed after connecting things in a less haphazard fashion.  There were a lot of things that are now cleaner, more organized, and more efficient at the end of the arduous process. 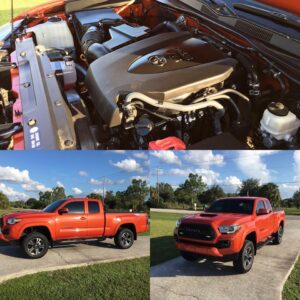 While I was waiting for the carpet installers to show up I had the detailer that I contacted out working on the Tacoma.  He spent over three hours on the truck, going over it inch by inch.  He cleaned the wheel wells, the engine bay, and seemed to vacuum up every single strand of dog hair that littered the interior.  He really did a great job and I felt he certainly earned his money.

I talked to him about also doing the Tesla down the road.  We also talked about the 3D printers I had running in the garage which he found fascinating.    For the carpet work I also had my PEVs in the garage on their 3D printed stands.  This caught John’s interest as he and his cousin also have a small skateboard business. He saw the stands I made for my one e-sk8 and Cindy’s conventional skateboard.  He said they were opening a store at the mall and thought a stand like this would be great for them to display their boards.  He asked if I had any interest in designing/making a few of them for him.

I told him I was very busy but I would be open to coming up with something on a limited basis.  I told him the main thing I would require is one of the boards that can be used to prototype with, making sure it fits well and is secure.  Supposedly after work tonight the cousin is going to drop off a board to do exactly that.  I surely don’t need more work on the 3D front but this will be a fun little challenge that could lead to more opportunities down the road.

I was sort of dreading the carpet project so it feels good to have it in the rear view mirror.  Having the work done now should buy us another couple years until we decide what to do with the flooring in those rooms next.  I have had a pretty constant feeling of being behind the curve of what needs to get done for awhile.  I can deal with that feeling in short bursts but it is not viable long term.