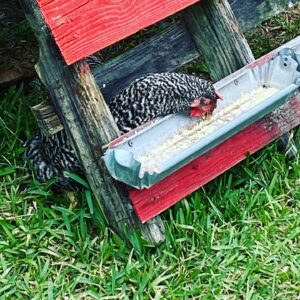 I figured I will get the tear jerker stuff out of the way up front.  Katie has been having physical issues for damn close to two years.  Out of the blue she developed a problem walking that we never determined what from.  She has gimped around ever since.  Last year she had an episode where she seemed on death’s door, she was just sitting alone and hardly eating or drinking anything.  It was amazing that she somehow rebounded and was more or less normal, for her, limp and all.

In the last couple months Katie was having more difficulty walking.  Many days I would be her personal Uber, picking her up and moving her to different spots so she wouldn’t have to walk there.  It was so sweet at night, she would wait for me to come out to give her a lift onto the perch.  I would call her name and she would make the cute little noise she always did in acknowledgement.  I would always try to place her on the perch next to her sister, Kathy.  So for awhile Katie seemed to be on a plateau, not getting any better or worse.  Despite having problems walking she was always fine on the perch at night once I placed her there.

On Saturday Katie seemed a little slower than normal but she livened up once I cut up watermelon and gave it to the hens.  She ate it up happily.  So Saturday night Katie was standing a bit oddly in front of the coop but she was doing that now and then recently.  I scooped her up and placed her on the perch as I have been for so long.  Looking back, when I called her name “Katie Kate” she didn’t chime back with her cute noise, a sign she wasn’t feeling well.  When I placed her on the perch she was unsteady and fell off in a few seconds, that was when I knew something more serious was up. I picked her up off the floor and put her in a nesting box.  Sure it meant I would have to clean the box in the morning but at least I knew she would be safe in the box, or so I thought.

So I opened the door Sunday morning and I see Katie on the floor, wedged between the food bin and the wall, which is on the opposite side of the coop form the nesting boxes.  She must have tried to get out of the box, fell on the floor again and then struggled to get where she was.  She did not look good.  She could no longer stand, and she couldn’t even sit reliably without support.  By this time I have seen enough dying chickens to know Katie was on her way out.  Her bottom was soaked from not being able to stand.  I started to cry as I placed her outside on the ground in a nesting box for support.

She kept her eyes mostly closed as I interacted with her during the day.  She did take a few bites of melon for me and a couple sips of water.  I moved her to various spots around the yard to keep her in the shade and nearby the other birds, just because I thought she would like it, we did a greatest hits tour of her favorite hang out spots.  By the time evening came around she was barely responsive, keeping her eyes mostly closed as she breathed deeply and slowly.  I filled up the nesting box with fresh shavings to give her something soft to sit on.  As rubbed her head I told her she was a good girl and that I loved her.  As I closed the door I was pretty positive that was the last moment I would see Katie alive.  Before I left work I went out to check on her and confirmed my feeling was correct.

She hadn’t moved from where I placed her, hopefully she passed peacefully.  Although I felt emotional about her laying still, part of me was relieved she was no longer in pain and suffering.  As has been the case with some of other hens, they will put up a good face when they are ill right up until the very end but when they have nothing left they succumb quickly.  Tonight I get the unwelcome task of burying Katie in the back of the property, a miserable but necessary duty.

Ok so what less miserable things went down this weekend?  Saturday was a day filled with mini-tasks and chores.  We had Sadie out at the house for the first time in close to two months.  We were both surprised to see that she looked noticeably heavier.  With the weight came a much more difficult time with basic mobility.  We both felt badly and attribute some of the problem with not having her at the house recently where she has a lot more opportunity to exercise in the wide open spaces of the property.

I finally figured out what was wrong with one of my 3D printers during the day.  I was considering doing a pretty extensive tear down on the unit to fix a chronic under-extrusion issue.  Just when I was about to look at ordering some parts I discovered the problem was stupidly simple.  The brass hot end nozzle somehow worked it’s way loose.  A couple turns with my nozzle installation tool and it was printing perfectly again.  The printer had been down for over a month and the fix was so damn easy.

Deb came over again Saturday night to hang out, a near weekly tradition at this point.  I once again grabbed food from Lil Apetito for us, despite the problem the week before where I waited 45 minutes longer than told on the phone to get our meals.  This time the wait was reasonable and we got extra garlic knots thrown in because Deb complained about the lack of salads and slow service the week prior.

Sunday I didn’t get out for a ride.  I had other things on my plate and we were babysitting DJ for several hours.  I can’t quite explain how endearing it is to have the little guy come crawling over to me, get on his knees, and look up at me with his arms stretched overhead in “pick me up” form.  I love the little guy.  Based on my interactions with him I am pretty sure that if I would have been put into the role of fatherhood as a younger man I would have done ok.

Cindy and I spent the last several days binge watching the third season of West World.  It is an HBO show, which I no longer pay for.  However Xfinity was doing one of their promos where all of their premium services are free for a week or two.  Yesterday was the last day of the promo so we had to jam in the final three episodes in one sitting.  It’s a crazy and deep series.  I thought the story had come to close after season two.  I once again think the story has ended but there was a crack left in the door for them to continue further if they desire.

After my PT appointment this morning I grabbed coffee at DD.  When I went to pull the cup out of my cup holder in the Tesla, the lid which was not evidently securely attached flew off.  The end result was at least 1/4 of the extra large dumping straight into my lap.  I was furious and cursed the drive through worker as I sprung out of the car, looking for something to help curb the mess.  The best I could do was my gym towel and some hand sanitizer.

As I walked into the office I hoped that no pedestrians took the time to focus on my crotch area that clearly looked like I just had explosive diarrhea in my pants. Happy Monday.