Last night was another late one with my eyes not shutting until about midnight.  After playing some WoW I was going to shower and hit the sack.  Just before I turned off my computer Cindy told me Katie was asking about playing some in VR.  Despite my oncoming sleepiness I told Cindy I would get in and play with her.  Cindy was already in bed so she stayed there, and just put on her Quest headset so she could be in our virtual party while Katie and I played some Beat Saber in which I lost every game but one, which I am accustomed to.  We were just getting ready to do some bowling when DJ woke up so Katie had to jump out.  When I looked at the clock after taking the headset off I realized it was a good thing timing-wise. I am feeling a bit sluggish this morning, hopefully the XL DD coffee can help burn off the fog.

This is Super Bowl weekend.  The pandemic is a pretty solid excuse to not have a Super Bowl party once again.  I don’t know if Cindy will invite anyone over last minute.  I do find the game interesting with Tampa Bay actually getting a home game for the Super Bowl, which to my knowledge has never happened before.  I also find it amazing that Tom Brady has served up the ultimate FU to Bill Belichick and the Patriots, taking the Buccaneers to the Super Bowl while New England failed to even make the playoffs.  I really would be ok with either team winning as I have reasons to be happy either way.

Brady and the Bucs winning would be like writing the perfect ending to an unbelievable career.  If the Chiefs win it’s another feather in the cap of the former Eagle’s coach Andy Reid who despite frustrating me greatly at times, I am happy for any success he has had since leaving the team.

So Alfie Oakes has gained a ton of notoriety in our area over the last couple years.  Until he became exposed as a hardcore Trump cultist, he was best known for building the most extravagant and delayed super market in our area.  His Seed to Table store opened up 4-5 years late but has had good success since it opened it’s doors.  He has done what I feel is the dumbest thing you can do as a business owner, make your politics public.  He started publicly ranting on social media, at times it was almost as if Trump’s hand was jammed up Alfie’s rear end, working his mouth for him.

Alfie also liked to emulate Trump’s litigious ways, suing the county for trying to make him enforce the county mask mandate.  Just like Trump, he has lost these cases, repeatedly.  He has held Trump rallies at his store and even paid to rent a bus to take a load of like minded Trump zealots to the riots in DC on January 6th.  The guy is really a piece of work. 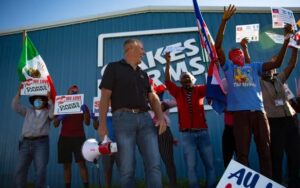 Well all of a sudden yesterday I got a message from one of my friends in PA about Alfie, asking what the hell was his problem?  Somehow his lunacy had gotten national media attention focused on a news person that filmed a walk down the cash register line at the store.  Not a single customer or employee wore a mask and there were none of the basic safety features set up at the store like have become commonplace like spit shields.  It was quite the badge of honor for Naples to be associated with such an individual.

It’s a shining example of people not caring about the big picture.  Their simplistic thinking is if they aren’t worried about getting sick that is where their concern ends.  I find it ironic that many of these people also claim to be religious which teaches some core tenants, like caring for others.  I have several first hand stories of covid nightmares in my personal circle of existence, perhaps that is the only way the “me first” type of individual wakes up.  Taking basic preventative steps is not a big ask until the numbers start going the right direction and show the spread is dying off.  If you are bored just Google “Alfie Oakes” to get an eyeful of the end results of Trumpism when you have more money than compassion.