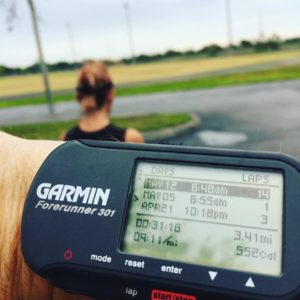 On Saturday Cindy and I drug ourselves out of bed with a 6AM alarm to go run at the track.  I ran the track last week solo and wound up averaging a very pedestrian 10 min mile pace according to my Garmin 301 watch.  In the span of  a week that pace dropped to 9:10 according to the same watch, the only difference being that I had a running partner this time.

From all my years in the running club I guess I always knew that running with others makes a difference but this made that point crystal clear.  When you do endurance training with someone else you both push each other, without even trying.  I’ve talked several times about what being in a race does to me.  You almost feed off the energy of others around you and the end result is you perform better than you would by yourself.  It’s a simple truth.

When we got home I immediately rolled into chores, completing the weeding and weed whacking before eating the omelet Cindy had prepared for me.  We had to stick around the house during the morning so I could meet up with the project manager from the roofing company.  The finish mismatch on the one side of the roof I complained about had already pretty much disappeared . 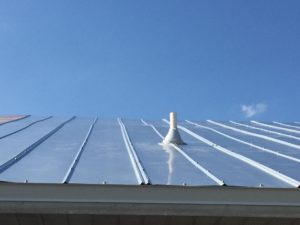 There was another thing I complained about that I didn’t think they would resolve, the hump.  Ever since the house was built in 2001 there has been a hump on the front facing section of the roof.  It’s something I didn’t notice during construction but became apparent soon afterward.  It was just another example of the half assed way the builder constructed the house.

Well anyway, I assumed when the roof was redone the hump would be addressed although I did not explicitly point it out.  I thought it was rather obvious.  Well it wasn’t addressed as you can see in the picture.  However I did mention it to my PM, saying I assumed they would fix this during the reroof.  I said this figuring it was sort of pointless since the metal was already down in this section.

Well I only realized on Friday that the hump was gone.  The PM actually had them fix it which I assume meant removing the roof panel and underlayment in that section and fixing whatever was causing the hump.  All I know is the front of the roof of the house for the first time in 17 years no longer has an unsightly bulge in it.  I was very pleasantly surprised.

The only other item we were concerned with was a dirt/grease mark on the back of the roof.  Mark climbed up there with a rag and was easily able to wipe it off, he said it looked like a footprint.  Why the roofers wouldn’t have wiped that up themselves is a question mark but it looks good now which is all that matters.

Mark gave me some tips for the new roof that has a 5 year workmanship warranty and a 25 year warranty on the metal.  I was afraid I couldn’t walk on it without leaving dents in the metal.  He said walking on it is fine but you have to be extremely careful because if the roof is wet at all it will be like ice.  He said the way to walk on it is to step on the screws to keep your feet secure, which surprised me.  He also warned me about not letting the branches from the nearby oak tree touch the roof.  He said if that happens for any length of time the roof will turn black in that spot and it’s nearly impossible to reverse once it happens.  There were a few branches within a couple feet of the roof which lead to the afternoon’s most exciting project.

Before that project began we took Sadie and Elsa along with us to Tractor Supply.  We love Rural King but I actually prefer the chicken feed that TS sells.  It’s higher quality and organic.  We wound up buying a bunch of other stuff while we were there.  We had fun perusing.  We dropped Sadie back off at Ali’s place on the way home after a week long visit.  We hung and talked to Shug’s for a little while before departing.

One of the things I bought at Tractor Supply was another electrical switch.  My hope was the old switch for the pool light was defective since it no longer worked after I tried to install the WeMo replacement.  When I took the box back apart some of the guts of the old switch spilled out, confirming my hunch.  The new switch brought the pool light back to life, not that I ever get to use it.

So, Mark’s advice regarding branches not hitting the roof inspired me to take action.  I identified several oak tree branches that were either a short term or mid-term problem.  Of course the solution is to cut down the branches with the caveat being doing so in a manner that would not send them crashing on to our new $20,000 roof.

My plan required Cindy’s assistance.  I needed her on the ground manning a strap that was looped around each branch to pull them away as I cut from up in the tree.  This project required me to fall back on my expert tree climbing skills I honed as a child at our Gouglersville farm house.  I can not tell you how many hundreds of times I climbed trees on our property as a kid.  It was one of the main sources of outdoor entertainment we had.

So I did not dress appropriately for this work.  I had safety glasses and leather gloves on but I also was wearing shorts and Crocs which was rather moronic.  An oak tree branch system is a gnarled mess which left me with a couple dozen scratches and scrapes all over my exposed lower body.  My weapon of choice to drop the limbs was my cordless Sawzall.  I figured it was a much more manageable and safer tool to use 15 feet in the air than my gas powered chain saw.

Our tether to the branch was actually my gymnastic ring set up which has long woven straps.  The ring itself made for a good weighted object to throw over the branches.  Getting the three roof threatening branches down went pretty smoothly.  I would cut just until I saw some movement and then Cindy would pull away from the house so I could finish the cut.  The roof escaped impact although the fence below did not.  It got bent from the falling debris but I was able to straighten it out  most of the way afterward.  I put myself in a few precarious positions doing the work but my 40 year old tree climbing reflexes kicked in.

After dropping the branches I climbed down to chop up the branches for disposal in the fill pit.  I fired up my chainsaw while Cindy hacked away on the smaller sections with the Sawzall as you can see below.  It was tough work but we were both glad to get it down so the roof is not impacted down the road.

Sunday morning the skies were overcast, an indicator of the substantial rain that followed later in the day.  It was Mother’s Day so I wanted to make sure Cindy got to do whatever she wanted to do.  I tended to the chickens and offered to make her breakfast which she declined.  She just loves to cook.  Because of the rainy looking skies and other needs we didn’t do any EUC riding this weekend. Instead late in the morning we headed over to Cindy’s mom’s place to install the Ring doorbell she bought for Mother’s Day.  Her mom was at church so we had a window to install it secretly.  There was no existing hard wired doorbell so I dropped four holes into the stucco to mount it by the door.  The install went fine but there is a possibility the Ring is actually defective.  You can hear the audio of someone by the doorbell but the audio from your phone is not being heard back. 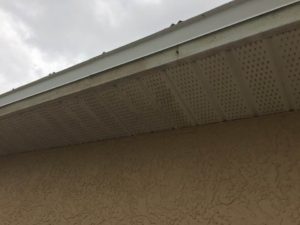 During the afternoon the rain started but I still had a project I wanted to start on.  With a brand new roof and brand new gutters arriving in about a month I felt like I needed to clean the gray/green eaves.   We have cleaned this using various techniques over the years, most of which involved pressure washing but I decided to take a very manual approach this time.  I used a cleaner/degreaser that I sprayed on generously one three foot section at a time and then wiped it down using a couple big microfiber cloths.

It is a slow and somewhat arduous process as I moved the ladder down the wall, working around various obstacles along the way.  The last third of the one side that I finished was done in a steady rain, adding to the misery.  I’m happy with the end result as it has been far too long since this had been done.  I hope to possibly knock out the other three sides of the house by the end of next weekend.

Around six we met back up with Cindy’s mom, Katie, and Daniel for dinner at a mexican restaurant.  The food was good but ridiculous in portion size.  I always feel like an absolute pig after eating mexican.  In addition to the huge portions you normally warm up by eating a ton of nachos as well.  Anyway, it was a fun time.  Cindy told me repeatedly she had a great day, which was the goal all along.