So I started my four day weekend off with my run.  I figured getting it out of the way on Friday would be a nice way to clear the weekend for two days of no alarm.  I missed running the week prior due to my various One Wheel injuries.  The week off did nothing to make the experience any easier.  It was almost 80 degrees at 6:30 AM and the humidity was brutal.  It was an uncomfortable run from the first stride to the last but I endured.

So the main reason I took Friday off was so I could take Lucy to the vet to see if they could drain the huge swollen area under her one wing.  Catching her to put her in the cat carrier wasn’t easy but once we got her in there she was calm.  It was Lucy’s first car ride.  We had gone to this vet once before with Lola, one of our chickens that passed away a couple years ago.  I remember that experience wasn’t spectacular.

So I didn’t get to actually see the vet until a solid 20 minutes after my appointment time which was slightly annoying.  When she did come in I quickly remembered what I didn’t enjoy about our last experience, the woman is sort of a bitch.  Her attitude was off putting.  She looked at Lucy for a minute or two, she was taken back by the size of swelling and commented on how it felt hot.  I told her we noticed the same thing and thought the heat may mean infection.  She said it could be infected or maybe some sort of tumor.

She then presented me three options, try to drain the mass and give antibiotics, take a biopsy and send it out, or do X-rays for more information.  I told her I walked in there hoping for her to do the first option to see what sort of results we can get.  She took Lucy to a back room and returned a few minutes later with a syringe with some bloody fluid in it.  It wasn’t a huge amount.  She said that was all she could get out.  She said she even made a small incision but got very little out.

Ok well that was all I wanted her to do at this point.  They gave us two weeks of antiobiotics and anti-inflammatory medicine to give Lucy by mouth, twice a day, that will be fun.  The 15 minute visit cost $150, what a bargain.  At least we had some meds to try to actively combat whatever is going on.  Other than catching Lucy each time, giving her the meds hasn’t been that bad.  It’s a two person operation but she is rather cooperative taking the liquid.  Maybe she knows we are trying to help her.  Her wing was bandaged up from the vet which she hated.  We couldn’t take it off until the next morning.

Cindy was working most of the day which left me home to melt outside while doing chores.  I first weeded and then followed up with weed whacking during the early afternoon, in the absolute hottest part of the day.  We are now in the part of summer where the heat and humidity is merciless.  By the time I was done I was depleted.  I jumped in the pool to get my body temp down and still felt washed out, so much so that I actually laid in bed for an hour, something that is very, very rare during daytime hours. 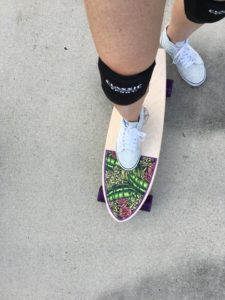 On Saturday it was nice to not have to set an alarm.  After tending to the chickens we headed out to run some errands. One of those included stopping at Ron Jon’s the place I got the One Wheel from.  I just wanted to look at more of their skateboard gear.  Cindy did a lot of skateboarding as a kid and was really interested in all the stuff they had.  We talked a lot with a kid that worked there named Miguel.  We wound up walking out of there with a cool board for Cindy.  She was very excited by the prospect of reliving one of her childhood highlights.

Later in the afternoon when we got home she did her first riding in the driveway.

I neglected to mention I rode the One Wheel all the way to Dunkin Donuts and back on Saturday morning.  The unit is rated for 12-18 miles of range.  The ride was more than 20 miles.  I made it home, just barely.  The video is pretty entertaining.

Saturday night we met up with Cindy’s family to celebrate her neice’s 24th birthday.  It was held at Iguana Mia, a place I used to like but have had several poor experiences at lately.  My food was better this time around but Cindy’s mom was not as pleased, telling the waitress she was given the worst taco salad she has ever eaten. A lot of the lettuce was brown and nasty looking. They at least didn’t charge her for the food.  Everyone seemed to have fun and I had a couple Shock Tops to take the edge off.

On Sunday morning Cindy and I took the Segway I2, the OneWheel and her new skateboard out for a ride.  It was a fun little trip that surely had to look strange to oncoming traffic.  Cindy made some real strong progress blowing the dust off her boarding skills.  She was rolling around the school parking lot pretty confidently, it was impressive.

Shortly after we got back I had to dive into fixing the tractor steering arms, one of which fell apart last weekend mowing.  I pulled the tractor into the garage to avoid the blazing sun.  It quickly became obvious that this was going to be a much more involved job than I expected.  I thought I could just pop off a couple nuts for each arm and swap in the new one.  The problem is the rear nut is attached to the steering plate which is snugged up against the underside of the tractor.  I had no access to turn off the nuts, the only way it could be done is by dropping the steering plate. 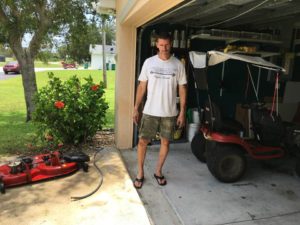 Doing this was a huge pain in the ass.  I had to remove the mower deck and then use contortionist like skills to hold a socket on the nut up inside the body of the mower while turning out the 3/4″ bolt below.  I was coated in oily, dirty, organic matter mixed with a constant stream of sweat.  It was quite the ordeal but I finally was successful.  I was very glad I decided to be proactive and ordered the arms for both sides even the one was still holding together.  If I didn’t get both I would have been repeating this shit a few months later.

I wasted no time putting my repair to the test, mowing the front half of the yard.  Even with the canopy the heat radiating down made the task miserable.  The good news is the steering is working well.

I spent close to two hours later trying to work out some bugs I have been having doing my EUC live streams.  I finally got it sorted out with about 45 minutes to go before the broadcast.  The stream went pretty well although it was a bit awkward for me.  The show is all about electric unicycles and I haven’t ridden my EUC’s since I got the One Wheel.  I still think we did a decent job.  I want to work on coming up with a more structured format which should flow better.

Today is my last day of vaca.  I have work planned, as always but hopefully an equal amount of fun.