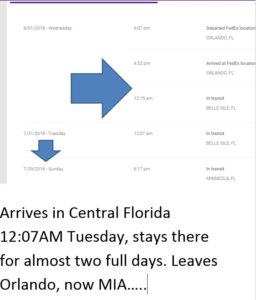 So I have been patiently waiting for my KingSong 18L EUC to arrive for several months.  The wheel literally was on a slow boat from China until it landed in California late last week.  From there it was handed off to FedEx ground for delivery to Southwest Florida.  The wheel had a delivery date scheduled for yesterday, August 2nd.  As I was tracking it’s progress across the country I was getting excited as I saw it actually had already crossed into Florida on Sunday.  Wow, maybe I’ll actually get it a couple days early??  Well things have definitely not gone as I hoped.

After crossing the Florida border, for some reason it took a full day to get to central Florida where it arrived just after midnight, early Tuesday morning.  Normally once something hits central Florida we will get it the next day.  Well not in this case, the box instead sat in Central Florida until Wednesday evening where it finally got a departure scan at the Orlando distribution center.

When I woke up Thursday morning I expected to see an arrival and departure scan at the Fort Myers facility with a “on truck for delivery” status.  Nope, the status had not changed since the previous night, great….  So I went throughout the day checking the status and seeing the same aggravating lack of new information.  I held out hope that maybe they just missed a scan somehow and the box was actually on a truck and headed my way.  Well of course you can guess that did not happen.

So last night I called FedEx and asked what was going on.  Of course the phone rep is looking at the same information I was and had no explanation when I pointed out the incredibly slow movement of the box once it hit Florida.  The best they could do was open up a “tracing case”.  I had someone from that department call me up and ask for details about the contents of the box.  Again when I asked why this would happen the only guess she came up with was maybe the label came off the package.  Yea, thanks, I’m sure that’s it….

I am hoping that the box was not either damaged or stolen but that would be just my luck.  I will be rattling some chains at FedEx big time today, you can bet on that.

I expected to be spending last night unboxing and trying out the new wheel.  Instead I used a good portion of the evening plowing through my book.  When I turned off the light before bed I only had a chapter or two to go.  This weekend I hoped to get a ton of KingSong riding/testing in.  I may still get a lot of riding in but it may be on my OneWheel instead.  Of course there is stuff to do around the house, a variable constant.