Last night was quite busy as Thursday evenings go.  I headed straight from work to Boston Beer Garden to meet up with fellow fantasy football team owners for the draft lottery pick.  I have had unbelievable bad luck when it comes to draft position.  I have picked the last draft spot at least four or five times.  This year my luck was a little better as I grabbed the number 7 spot.  Normally I would hang around and drink a few beers but Katie and Daniel expressed interest in coming over to try the One Wheel and Meepo so I left the bar shortly after drawing my number. 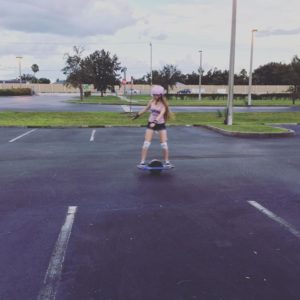 I had only been home maybe 10 minutes when the kids arrived.  I quickly changed and threw the gear in the back of the Prius.  We met over at the school.  Katie tried the Meepo first.  I gave her quick pointers on how the remote control worked and she was off, slowly at first but soon she was doing slow and steady laps.  I had the board set to beginner mode where she was speed capped at 10 mph.

I gave Daniel basic One Wheel instructions but because of his pretty extensive skateboarding background riding the board wasn’t tough for him, the hardest part is learning how to stop and dismount safely.  Cindy showed up early in the session, coming there straight from teaching class.  She always loves when all of us are together.

After awhile on each device Katie and Daniel switched it up.  Katie felt very unsure of herself on the One Wheel for awhile but never fell and did a good job circling the lot.  When Daniel got on the Meepo it was like love at first sight.  After 10 minutes of riding I unlocked him to advanced mode with a 25 mph speed limit.  He was ripping back and forth across the parking lot with ease having next to no learning curve at all.

I only rode the One Wheel very briefly.  I instead just let the kids have fun trying out the two new forms of electric transportation.  By the end of it Daniel was sold on the Meepo.  I am pretty sure he will be ordering himself one very soon.  Katie loves the Meepo as well as the One Wheel.  She commented how she actually felt like she was working her lower body, something she doesn’t really get on EUCs at this point.  They both thanked me for letting them try out the new toys.  Hopefully they want to start riding with Cindy and I again on the weekends as a result.

I had not had anytime to eat dinner so that only happened around 8:30 when I got home.  After dinner I still wasn’t done, working on a custom 3d stand model for a customer and then remoting into the office to get some after hours tasks done.  It was a long night that left me feeling groggy this morning.

This weekend is the precursor to what will be a hectic weekend in 7 days when Cindy has her bikini competition next Saturday and then I have to move one of our offices to a temporary location next Sunday, followed by hosting our fantasy football draft party on Monday.  That doesn’t mean this weekend will be a laid back, veg out couple days.  The tasks just don’t stop coming.