So yesterday I got a call back on the results of the CT chest scan I had done on Monday.  I found the results somewhat surprising.  The entire reason for the CT was a small nodule that showed up on my chest x-ray a couple weeks ago.   So the CT confirmed the nodule which is 4mm in size.  It indicated that it is likely benign but as a precautionary step they want me to get another CT in six months to ensure there is no change in size.  The other lung news I wasn’t expecting.

The scan showed what appears to be “mild fibrosis” in both lungs.  Fibrosis is a thickening or scarring of the lungs.  The nurse practitioner verified that I never smoked before although my mom smoked during my entire childhood.  I don’t recall her smoking around me in closed spaces on a regular basis but in general society was a much more smokey environment in the 70’s and 80’s.  She also asked if I ever had any exposure to asbestos which I am unaware of outside of the renovation project at work had an asbestos removal period. I’ve never had anything remotely approaching a breathing problem that I can recall so this struck me as very odd.  As a kid I spent endless hours playing in moldy, dusty hay in the old barn, that was the only thing that popped into my head as my inhaling something bad for prolonged periods of time.

The other thing on the report that I found mildly disturbing was the presence of “atherosclerotic calcification in a coronary artery”.  The NP downplayed that part of the report but it was sort of a red flag for me based on the heart attack that killed my mom.  The description I got from the doc at that time of her passing was plaque broke loose from artery wall and stopped the heart.  A quick Google search on the condition didn’t put a smile on my face either. “Simply put, the presence of calcification in the epicardial coronary arteries indicates that the patient has coronary atherosclerosis. This observation is of great significance, because atherosclerotic coronary artery disease is the number 1 cause of death in the Western world.”

So of course none of this information made me feel better, especially considering the emphasis I have put on consistent healthy living habits as an adult.  So anyway, I have a follow up appointment tomorrow with a pulmonologist to discuss the results and a plan of action.  The thing is, I have never had a chest CT before so I have no idea if these findings have been around for years or even decades.  It’s good that I at least now have a heads up about it but man, my 50th year on the planet has surely been a downer from a health perspective. 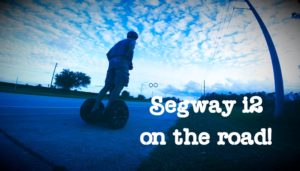 So you may recall that early this year I came into possession of a non-operative Segway I2, the big daddy of personal electric vehicles.  The Segway was given to us by a friend that had it given to them years ago.  It sat unused in their garage for somewhere around 5 years.   In order to get it working I had to spend roughly $1000 dollars on a used set of batteries and a new “key” for the i2.

Once we got it working we took it out a few times.  Cindy especially enjoyed the stability and size of the unit and rode it more than I did.  When we got the i2 it had somewhere around 25 miles on it, it now has 101, still an incredibly tiny amount of use for a 5-6 year old Segway.  Well the bottom line is we just did not use the big Segway much.  It’s size and weight made it a pain to transport and limited where it could be used.  It has mostly passed it’s time just parked by the front door.

Well I have been considering yet another type of electric vehicle and it struck me that if I could manage to sell the big Segway, which still can command a surprising number, it would make that idea much more doable.  These units were $5-6k brand new and it is not unusual to see used ones still going for 3-4k.  However this vehicle appeals to a very niche market.  I listed it on Craigslist as well as Ebay, not expecting a great result.  Because of the size of this thing the Ebay listing included “local pick up only” as the shipping choice, there was no way I was going to try to ship it.

As expected I received no interest on the Craigslist ad.  However the Ebay listing generated a lot of interest.  In the first 12 hours I had a bid of over $1000 and had a half dozen inquires asking for more info.  I priced the unit very aggressively when compared to other i2’s on Ebay, especially considering the incredibly low mileage.  I had people trying to negotiate me down from that already low number which I declined.  Based on the amount of activity so soon I did not feel any need to cave.

There was one perspective buyer who was really interested.  He sent me 5 or 6 messages which of course included lower offers.  I engaged him and politely declined his offers letting him know I had a lot of interest so I thought me selling it for my asking price was a strong possibility.  I guess my information worked as early yesterday afternoon I saw the email that this person did indeed buy the i2 for my full price, wow.  To make the sale more crazy, he is driving down from KANSAS this weekend to pick it up, yes Kansas.

Before listing the Segway on Ebay I would have placed my odds on selling it at 20% or less.  To sell it in one day feels like an incredible stroke of good luck.  I have not pulled the trigger on purchasing my new target yet.  I have a few questions to get answered and wanted to wait until the i2 is loaded up and on it’s way back to Kansas before calling the deal done.