So I have had interest in having a Generlink installed at the house for quite awhile.  It is a device that gets installed onto your electric meter that allows you to plug your generator directly into your house wiring during a power outage and then control the distribution via the fuse box.  It will be a HUGE improvement over the extension cord nightmare we have had to deal with in the past.

So I originally called our power company about this option in May.  At that time I was told they were out of stock and I should call back in September.  So I set a reminder and called almost two weeks ago.  AT that time I was told there was noone available in that department currently (huh?) but someone would call me back.  Well I called twice over the next 10 days and was told the same thing.  The second time I gave the phone rep some attitude, saying I thought it was bizarre that I wanted to pay them for a service but no one could be bothered to call me back.

Well finally yesterday I did get a call back.  I was prepared to give the woman shit for such a terrible response time but she immediately disarmed me with her pleasant attitude and friendly demeanor.  My install is now scheduled to happen sometime next week.  It’s testament to the power of how simply being nice to someone can swing a negative situation into something positive. 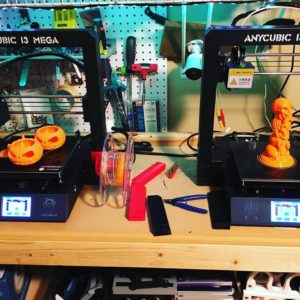 I had two of my printers working overnight cranking out Halloween themed models.  Having 3D printers is a little like Christmas.  You go to sleep with anticipation of what will be waiting for you the next morning.  Maybe that is part of why I like it so much.

Cindy is really good at painting the 3D models I create, as you can see.

This weekend we are going to get out to the movies and although I don’t have anything huge on the to do list there will always something worthy of my attention, in my mind.