As I mentioned several times this past week, I have been in the midst of a shitty week at work.  To compound matters, Cindy has been having her own stress from trying to do the majority of the double bathroom vanity project herself.   It has just been a lot of shit going on.  On Friday I left the office a little early so I could attend to some chores at home, since I had to work a good portion of the day Saturday.  I also needed to bring home materials needed to do the last prep work before Ray came in to install the new vanity on Saturday morning. 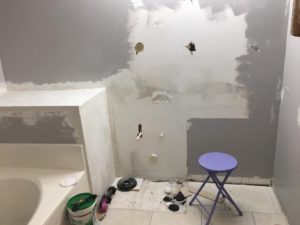 Cindy had made a ton of progress during the day, redoing the drywall box behind the tub, so that it now can accommodate the full 60 inches required for the new vanity.  She had been busting her ass all week since the vanity showed up.  I felt badly she worked so much on the project with only minimal assistance from me but had my own battles at work I was dealing with at the same time.

So Saturday I was out the door around 8 and did not get home until close to 1:30.  By the time I walked in the door Ray and Doug had just about finished up with the install.  Taking a look at the plumbing work they had to do made me glad I did not elect to tackle this project myself.  The vanity looked good in it’s new home and of course the bathroom felt entirely different.

So despite working at the office for half the day,  I had to turn on the reserve gas tank to help Cindy get things back in order.  As you can imagine a project like this requires a lot of tools and creates a lot of mess.  Hell I spent 30 minutes just cutting up all of the cardboard from the work outside.  We diligently worked our way through it and eventually got things mostly back in shape.  There were two things that needed to get done, glue on the backsplash and hang the new frameless mirror.  We got the back splash glued up Saturday night.  The install could really use two side splashes as well but we haven’t really figured out how to make that work yet thanks to the horrible workmanship on the walls in that bathroom.  Not only are the corners not square, the back wall has a nasty bow in it.

Saturday night we watched the last 50 Shades of Grey movie.  It may have been one of the worst written movies I ever saw.  Of course they tried to prop it up by inserting sex scenes every five or six minutes.  The origin story for the villain in the movie is laughable.  I’m glad the series is over. C+ 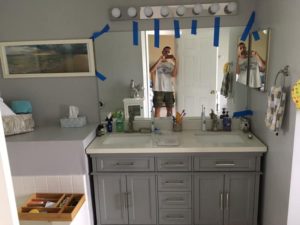 So this morning we wanted to get the mirror on the wall.  Like I said the bowed surface meant we already knew the mirror would only be glued in place on the high spots.  We helped offset the poor adhesion surface by making sure the bottom edge of the mirror was on the backsplash, to help shed weight.  I applied large amounts of adhesive to the wall and then Cindy and I pressed the five foot mirror into place.  After holding it there for a little while Cindy applied some painter’s tape to keep it against the surface to cure.  Later in the morning I miter cut a piece of floor molding to replace one that was removed during demo.

We are both happy with the end result.  There may be a few minor tweaks remaining but it is 99% there.  Despite dealing with a lot of hand pain from all of the gripping, Cindy plowed through the project and got it done.  As always I am appreciative of having someone in the household that works as hard as I do.

We did get out for a brief ride in the morning to Max Hasse park.  We never rode the area before.  It was small but scenic.  I had a good time rolling around on my One Wheel while Cindy was on her MiniPro.

The Eagles game was a throwback, a throwback to how the team has played more often than not the last 10 years.  After amassing a 17 point lead going into the fourth quarter I thought the team would be able to close out the Panthers.  That was a key difference with last year’s team, they knew how to close out games.  That skill set seems to be missing from this year’s squad.

The defensive mindset is maddening where they rush four and drop seven in coverage.  However most of these seven players are not in actual coverage, they are just standing around trying to read the play, which they seem to be pretty awful at doing.  During the Panther’s three straight touchdown drives, time and again I saw guys standing there flat footed as receivers easily ran free around them.  I think this scheme blows or it at least blows with the personnel the team is putting out there.  The fourth quarter was basically prevent defense the entire time.

I just don’t get it.  Last year the Eagles flipped the script in these situations and continued to be aggressive, even when carrying a lead.  Why Pederson seems to be willing to abandon what got them to the pinnacle of the league last year is very confusing and annoying to me.  The team desperately needs at least one quality cornerback out there and needs to realize this front four is not getting enough pressure by themselves to be relied on so heavily.

It takes a special kind of suck to blow a 17 point lead in 15 minutes.  Grats to the Eagles for finding a way to do it.

The blog is hitting the streets tonight because I once again have a jam packed day ahead of me tomorrow.  The good news is that if I get through the next 24 hours things should be more or less back to normal through Christmas.