Friday after work I got out to run once again, my third week in a row.  I had just done lower body work on Wednesday so my legs were feeling rather cement-like and sore but I trudged through my conventional 13 laps without a major incident.  After the brief reintroduction to group exercise on Thanksgiving, where there were 7 or 8 other people on the track, I once again was the only person out there which in most ways I prefer. 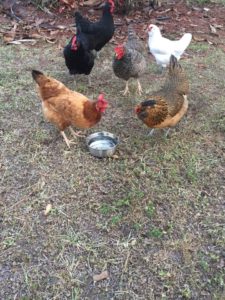 So on the weekends I am usually the one that does chicken morning clean up duty as Cindy does it every other day of the week.  I headed out there pretty early, a little after 7AM.  I started doing my preliminary tasks like scooping poop in the run and spreading scratch grains around.  As I did I looked around and didn’t see Stephie in close proximity which was a bit unusual since she normally likes to hang close to me.  I figured she was maybe out in the yard behind the coop or maybe even under the deck of the coop, although it would be pretty early for her to be under there.

So I continued on my clean up for a few minutes but still didn’t see Stephie (bottom right in the picture) show up.  Ok well she must be around here somewhere so I stop what I’m doing and start walking around the chicken area looking for her.  I look in the back yard, the front yard, in the corners of the coop and then down on my knees to look under the coop deck.  When I scanned under the deck and still did not see her the red light went off.  Where the hell is Stephie….

So I didn’t want to panic too quickly so I repeated my search pattern one more time, hoping that I somehow just missed her hiding somewhere, anywhere.  I again came up empty. The harsh reality that something happened to my favorite hen was sinking in…

So now I went inside and told Cindy I can’t find Stephie.  I confirmed with her that she was in the coop last night at bedtime, which Cindy said she was.  Cindy said she swore when she came out of the bedroom she saw Stephie walking in the yard.  If you recall earlier this year I added a second automatic door to the chicken run so when the birds get up they not only can exit the coop but also the run so they can go outside without us letting them out.  Stephie was normally one of the early hens to come out as she was generally the outcast of the flock and picked on by many of the others.

Cindy immediately headed out there to do her own search.  I instead headed to the computer to try to pull the security DVR footage of the coop to see what the hell was going on.  My emotions of sadness and despair were joined by frustration when I realized that the DVR had not been recording footage for several weeks due to some sort of problem, unreal.  The only recorded footage I had was the camera on the house that shoots towards the coop.  All recordings are motion based and the times that camera recorded did not show anything of significance.

So now we had to assume that some sort of predator came in between when the outside door opened at 6:30 and when I went out there a few minutes after 7.  When we had a coyote take Cocoa over a year ago it happened early in the morning as well.  We went into investigative mode, trying to get a clue to what happened.  There were absolutely no signs of an attack or struggle in the chicken area itself.  Normally you will see at the very least a collection of feathers and/or some blood.  Stephie was nervous, agile and fast, I had a hard time imaging something grabbing her so easily without a struggle. We expanded the search to the rest of the back yard, walking the entire fence line, again looking again for any signs of an attack.  Cindy and I both walked the fence independently and neither of us saw even a single feather.

I later emailed my neighbor across the street that had chickens and predators attack them.  She said her guess was it was a cat of some type, maybe a bobcat or panther.  She said they are can clear a fence easily and are lightning fast.  I guess that is possible but I still have a hard time believing there would be no traces visible of the event.  I was so angry that the DVR did not record the incident as this is exactly the reason I installed it in the first place.

I loved Stephie, as I said she was my favorite hen.  She knew her name and would come when I called her to give her treats away from the other hens so she wouldn’t get picked on.  At night when I put them to bed she would often jump across the perch, getting bit by the other birds as she did just so she could get close to me so I would pet her before turning off the light.  To have her just vanish and not know what happened broke my heart.

So of course not knowing what happened means it could happen to the other hens so I had to make some changes.  Having the outside door open automatically was something to give the birds more freedom but I didn’t ever think it would also present danger.  I wound up getting a second smart switch.  Before the coop and the run door were on the same switch so they both opened at the same time.  I now have it set so the coop door still opens at 6:30 but the door to the run does not open until 7:30 (but still closes automatically at night) so that we will be the ones to let the hens outside so we can prevent this scenario from happening again.

I thought about Stephie a lot all weekend.  Each time I did a rush of sadness accompanied it with the realization I won’t have her fuzzy face and sweet demeanor to experience any longer.

So my KingSong 18XL demo wheel showed up Friday.  I charged it up overnight .  I needed to get a good test ride in so I suggested to Cindy to ride out to Ave Maria, a 30 mile plus round trip.  So normally riding to Ave Maria would be something I would only do myself, it’s just too far for Cindy to ride on any of our wheels, however things are now different.  With the arrival of our Dualtron scooter last week Cindy now has something fast, comfortable, and capable of traveling distance matching or surpassing my biggest EUC’s.  She said she was down for the ride.

The 18XL that I was testing has a bigger battery and bigger foot pedal than the 18L that I bought earlier this year.  Both improvements were substantial as my feet hurt less than any other wheel I have ridden.  Cindy LOVES the Dualtron.  That thing is pretty amazing.  For the first time ever I couldn’t keep up with Cindy at times.  At a few points in the ride she approached 35 mph.  The video does a good job of detailing the experience.

Saturday night we watched Red Sparrow, a movie with some very explicit and graphic scenes, dealing with the Russian/American spy programs.  Despite several “oh shit” scenes I found the movie interesting and unpredictable enough to earn a solid B+.  If you ever wondered what Jennifer Lawrence looks like naked, this movie will satisfy your curiosity.

Sunday morning I did another test ride on the 18XL to Dunkin Donuts, a staple ride for all of my PEV’s.  There was a extremely strong headwind during the ride which made it downright unenjoyable at times.  The 18XL however once again performed well.  I told the story of the demise of Stephie during the middle of the ride.

Since the Eagles don’t play until tonight my Sunday afternoon was pretty open.  We did a run to Home Depot and later when we got home I walked around the property and sprayed all the castle stones I de-crudded last week with Wet and Forget, this stuff that I tried before to remove the crud by itself. It wasn’t effective in that role but my hope is spraying the stones after cleaning will delay the onset of more black crud returning.

Early in the evening I almost started the task of trying to replace the inner tube in my Gotway Monster.  However I came to my senses and realized that starting what is likely to be a frustrating task to close out the weekend would be a mistake.  Hopefully I can take a shot at it one night this week.