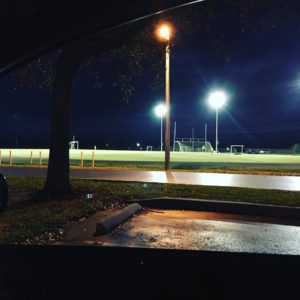 Friday after work I resumed my running program, trudging 13 laps around the local track.  It had been somewhere around a three week hiatus mostly due to my wipeout on the skateboard.  I felt pretty miserable the entire time but the first two laps were the worst.  My lower back was killing me and I just felt like I had no energy.  Repeatedly I thought about how nice it would be to just stop and get in the car but I refused to give in to the urge.   Instead I just continued on at my meager pace, doing my normal mental lap countdown.  Thankfully it eventually concluded without incident.

As I mentioned last week I took off three additional days around MLK weekend.  I have a long list of things I would like to get done with that extra time.  One of those things was refresh the mulch so I thought I would be proactive and get that started on Saturday.  I loaded up the Tacoma with 30 bags of mulch and spread it around the smaller landscaped areas.  I had enough to do everything except the orchard which will be done this weekend with another 30 bag load.  It’s actually much less work than it used to be since I converted several areas to rubber mulch over the last few years.  That stuff never wears out for obvious reasons.

I was cranking out some 3d prints on Saturday.  One of the printers I was using was my monster sized Chiron which has been somewhat problematic.  Well it stopped again in the middle of a print but for a new reason.  One of the cables that power the heated bed had snapped, evidently from wear.  The printer is only a few months old and has not seen heavy use.  A quick search online revealed that a ton of people have been having this same issue caused by low quality wire being used for the connection.  So now I have two choices.  I could get a replacement hot bed assembly from AnyCubic that utilizes the same low grade wire or I dig into the printer and install good wire that won’t break.  I am opting towards choice two but I know it is going to be a PIA to do.

My Netflix queue had emptied out so I had Cindy help me pick titles to help fill it back up.  In her selections were a number of movies that I would not normally seek out myself, romantic comedies.  I told her I was fine with it as she certainly has sat through plenty of movies I selected that she would not have chosen either.  The first such selection arrived over the weekend, Crazy Rich Asians.  Although it wasn’t a genre I have much interest in, the movie was entertaining enough and I didn’t fall asleep. I’d give it a solid B.

Sunday morning Cindy and I headed out for a ride.  We decided to park in the Target parking lot and push out from there.  As we were getting ready a very strange incident unraveled behind me as the camera was rolling.  I heard a commotion that included the sound of a very aggravated woman.  When I turned I saw a work van with the passenger side door open, it was still moving slowly.  The angry woman was half in the van but trying to get out.  She then yelled something about her foot.  The driver of the van then stopped for a brief second and the woman got out, slamming the door.  You can see her marching behind me angrily.  Luckily it seemed like her foot was ok.  I have no idea what it was about but I assumed a lover’s quarrel.  Cindy seemed convinced it was a day after prostitute drop off.  Whatever the truth was, it was the most bizarre way we ever started a ride off.

I looked forward to the Eagles/Saints game with anticipation.  I was hoping that the improbable playoff run of success could continue, despite the Birds playing the number one seeded team in the NFC, a team that absolutely destroyed the Eagles in the regular season.  The game started off just about as well as you could imagine.  The Eagles intercepted the first pass Drew Brees threw and scored two quick touchdowns.  Nick Foles looked like he was in top form, easily completing passes to various targets consistently.  On the flip side the defense seemed to be doing a good job of stopping the Saints offense, somehow.  Well for the remaining three quarters momentum slowly but consistently reversed.

When the Saints consumed almost the entire third quarter with ONE drive I knew we were in big trouble.  After those early , impressive drives, the Eagles offense sputtered.  The Saints defense started to play aggressive press coverage and it made a big difference.  One of the reasons the Eagles defense has been better with Foles in there has been his ability to engineer long, time consuming drives that keeps the Eagles suspect defense on the sideline and well rested. The shift in strategy by the Saints seemed to have no answer on Philly’s sideline, they never got back on track the entire game.

The Eagles allowed 20 unanswered points but after a missed Saints FG late that would have iced the game the team still had a shot.  Despite struggling since the first quarter I had hope that the Foles engineered offense could pull out yet another miracle finish.  It started to look like we had a shot.  Nick was moving the team down the field and was at the Saints 27 yard line with plenty of time. On a 2nd and 10 he threw to Alshon Jeffrey, who has some of the best hands on the team.  It was an accurate pass that hit Jeffrey right on his hands, and then went through them, into the hands of a Saints DB, game over.

It was a disappointment for sure, but to be honest, the way the game had turned, the Eagles didn’t really deserve to win.  Their defensive strategy where it is soft zone all the time just is horrific to watch, especially when you saw how effective the Saints press coverage was.  The entire game the Eagles rushed four lineman, dropped seven into coverage and got smoked time and time again.  I am not sure if this is just a core bread and butter strategy of Jim Schwartz  or if it is just the end result of not having the talent in the secondary to play press coverage, but I HATE it.  Allowing receivers to come off the line unimpeded at full speed while your defenders that are lined up 8 yards off the ball going into an instant back pedal is just a a ludicrous strategy to me.  The only way that works is if your lineman are consistently getting pressure on the QB, causing rushed and errant throws.

I found it extremely frustrating that there was no noticeable change in the defensive strategy as the Saints methodically picked it apart, rush four, drop seven all day long.  It was fitting that the defense was the ultimate downfall of the team.  The injuries to the starting secondary which I felt was already subpar put second and third stringers out there that just could not hang.  I can only hope something is done in the off season to significantly improve the talent back there.

So I took the loss relatively well.  Realistically even appearing in the playoffs this year based on how things started out was a huge win.  To beat the Bears and come within 27 yards of taking out a Saints team that crushed the Birds during the regular season really is impressive.  It will be interesting to see how this season will affect how the roster shakes out next year.  Everyone says there is no way Nick Foles is on the team next year as there are multiple teams out there ready to make him a starter.  I still question why the Eagles aren’t one of those teams making that consideration.  His performance under pressure over the last two years is unequaled in Philly QB history, IMO.

This was certainly a roller coaster year for the team.  I am less excited about Carson Wentz as our potenitial 10 year QB.  I get this nagging feeling we have another another Tony Romo in the making, a good QB that gets hurt a lot but never gets you there. For a young guy to not be able to finish the season two years in a row is a red flag for me.   I also am not a big fan of pre-planned, choreographed end zone celebrations that Carson is a big fan and participant of.  I much prefer Nick’s , slap hands and let’s go at it again attitude, no grandstanding, no taunting, just get to work way about him.

The team needs a get it done, reliable running back.  I think the lack of one for most of the year made a substantial difference. I dont know how much longer you can expect Jason Peters to play, he gets hurt on a regular basis at his age.  Of course the defense needs some major help.  To me, bringing back that starting secondary is simply not enough.  If you are pinning your defensive rebound on Jalen Mills being healthy, whom I think is more of a liability than an asset, you have big problems.  The only guy back there I have any confidence in is Malcolm Jenkins.

So it was a down way to end the weekend but at least I have two short work weeks ahead of me to look forward to.