I hit the ground running on my first day off.  I figured I would start off with something pretty simple, loading up another 30 bags of mulch in the Tacoma and refreshing the orchard with it.  I was pretty confident 30 bags would handle the job but it turns out I was four bags short which I grabbed the next day.  While I was out getting the mulch I made a planned stop at Costco to grab a few things we needed so Cindy didn’t have to make a stop later.

I grabbed the items as planned but I also made an unplanned purchase, a 55 inch LG tv.  I had been talking to Cindy loosely about the idea of me getting a new TV for the bedroom, despite the 47 inch LG set that was on the wall still worked fine, except for WIFI that didn’t want to work.  Cindy had said that if I did swap out the tv,  Katie and Daniel could use the old one in the new house they are planning on buying.  So anyway, for no particular reason I found myself walking down the TV aisle in Costco. 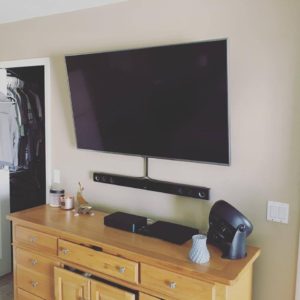 It really is staggering just how inexpensive large TVs have gotten in recent years.  They had a nice 55 inch LG ultra thin set for less than $500.  I didn’t grab it immediately.  I instead did my normal shopping to let the idea roll around in my head for awhile.  When I was done grabbing grocery items it still seemed like a good idea so I went back and carefully perched the large box across the top of my shopping cart.  I’m sure it looked silly. Since the bed of the Tacoma was packed to the gills with 30 bags of mulch I had to cram the TV box into the extended cab.  It barely fit, I had to jam the box at an odd angle in able to close the doors.

When I went to install the TV in the late afternoon I discovered that an assumption I made earlier was incorrect.  I assumed since the old and new TV were both LG sets, that they would have the same spacing on their wall mount holes.  Ironically the smaller 47 inch TV had holes that were 40CM apart and the bigger set had 30CM spacing.  So my plan to reuse the existing wall mount was scrubbed.  I wound up going back to Costco to get a new, and better mount that allowed a downward tilt, making for a better viewing experience at bed level.

The install of the new mount went ok.  The bedroom has metal studs that sort of suck for wall mounting a TV.  I wound up buying a bunch of drywall anchors that were rated to hold over 100 pounds each.  I utilized 10 of them for the install so I think the TV should stay up there.  Even though the TV has more screen real estate it is actually substantially lighter than the smaller set it replaced.

During the afternoon I also started doing prep for painting the chicken roof white, again.  I started doing this around three years ago to reduce the amount of heat the normally dark brown roof pulled in.  Before painting the roof, in the summer if you were inside the coop and touched the roof panels it would burn your hand in a second.  So the problem has been that even though I have been using paint that supposedly is made for plastic, it just does not last.  By the time a year has passed half of the paint is peeling off.

Last year I did very minimal prep to the paint before reapplying new stuff.  The end result was the paint lasted even less time than normal, as expected.  Hell one year I went so far as to put down primer first and then paint and it still fell apart in a year.  So anyway this year I am trying something different.  I had to try to do a better job with removing loose paint this time.  I got up on the ladder with the battery powered shop vac.  I used the suction tool as a scraper as well, breaking loose paint and ideally vacuuming it up right away.  I wanted to try to avoid getting a lot of old paint chips on the ground because of the risk of the chickens trying to eat them.  I soon realized that no matter what I did some chips were going to fall, I just went around later and vacuumed up some and broke the others down with high water pressure.

I also realized using the hose end as a scraper was not doing a great job either.  I decided to throw a paint stripper attachment on one of cordless drills instead. This did a much better job but of course made more of a mess.  It was tedious, shitty work.  Not only did I have to go over the entire surface with the stripper, I then had to go back over it with the vacuum.  Then as one last step, I hit the entire roof with a hose to hopefully get the surface as stable as possible for the new product I was using on the roof the next day.

When I woke up Saturday I was very sore from the labor of the previous day.  I popped a couple Advil to take the edge off the pain.  I resumed my work on the ladder early Saturday afternoon.  Instead of using the same paint that has proven to be ineffective over time I instead decided to drop a lot more money on a one gallon container of liquid Flex Seal, yes the stuff you see on infomercials where the guy holds together a canoe that was sawed in half with nothing but FlexSeal tape.

The product I bought is a liquid variant which is basically rubber in a can.  It boasts being able to stop leaks but that was not my concern.  I just wanted something that stuck to the roof like glue and lasted more than one calendar year.  Only after a few strokes I knew that it was going to be a very tiring job.  The FlexSeal is much thicker than regular paint.  Putting it on is a slow process that requires more effort than normal.  I methodically plugged away, consuming the entire afternoon in the process as I applied two coats.  I did not use great care as I applied it, I just slapped it on generously.  Once it dried it did feel like rubber and looked pretty good.  I am crossing my fingers it is able to withstand the brutal Florida climate.

On Sunday morning a new cold front blew in creating thunderstorms as it passed.  The air behind it was quite chilly with the temps not leaving the 60’s most of the day with high winds.  I figured it was a good day to knock out the indoor items on my to do list.  Two of the items were 3D printer repairs.  Neither of those went great.  One repair only helped my problem moderately, the other repair was an outright failure.

I wrapped up the day taking on the item on the list I was least looking forward to, ripping apart my Msuper EUC to tighten the axle nuts.  These wheels have some poor engineering that results in the nuts that secure the foot pedals to the wheel axle loosening up over time.  The only way to fix it is to rip the thing completely apart which is a major pain in the as to do.  However I had been putting off the work for awhile, if I didn’t do it during a six day break, when else would I do it?

The job was tedious as expected but overall went pretty well.  While I had it apart I also installed Slime into the tire to help prevent slow leaks, another task I should have completed a long time ago.    As the video shows, it was quite the job but the end result was as I hoped.

Sunday night I had another live stream and I caught a bit of the Chiefs/Patriots game.  It was historic that BOTH conference championship games went to overtime although it sounds like the Saints really got screwed on a pass interference non-call that would have changed the outcome.  I was pulling for the Chiefs to win, mostly because Andy Reid is the coach.  Instead Andy revisited his Eagle days where the team got to the championship game three years in a row and lost every time.  KC’s defense just seemed to have no answers in crunch time which is too bad.  Love him or hate him, you can’t help but respect what Tom Brady manages to achieve year after year.

The live stream went well and longer than expected.

So my to do list is officially complete, leaving me three days to do more of what I want to do.  Of course one of those things is coming up with more work.  After going out and doing a very chilly chicken clean up session this morning in the 45 degree air I later loaded Sadie and Elsa up in the truck for me to run to Home Depot.  I needed a replacement UPS for the coop and I also grabbed 20 bags of top soil.  Unfortunately to elevate the ground in parts of the chicken yard I do it via this manner.  What really sucks is the process requires me to load and unload each bag a total of four times.  Once onto the flat bed at the store, another time into the back of the truck, a third time from the truck bed onto the ground by the fence and then a fourth time as I lug each bag to its spot and dump it, one cubic foot at a time.  It’s a hassle for sure but my hope is the end result is I more or less double the amount of high ground the hens have available during the misery of wet season.

I hope to enjoy the rest of the day and repeat that pattern clear through Wednesday.