Back in my early to mid-40’s I shifted my fitness routine to almost entirely calisthenic type movements.  For a period of four or five years I did that and long distance running which drove my body weight down to the lowest level ever as an adult. (low 170’s)  My YouTube channel name is even based on that period of time (Dufisthenics).  In the last four or five years my routine mutated again with more of a mixture of conventional weight and resistance training, less running, and bigger numbers on the scale.  I have weighed around 185 pounds for a couple years.

I do however still try to keep up some base standards with my core body weight movements.  I can still do 15-20 pull ups, depending on the day, 50 push ups, and 25 dips.  Forcing yourself to work against your own body weight is still one of the most simple yet effective ways to improve your fitness level.  I have cut out some of the real high exertion calisthenic movements like dragon flags as they now cause the odd right side pain to flare up.  However I hope to be able to keep doing the core cali movements as long as I am able.

I hit another milestone on my YouTube channel, surpassing 5000 subscribers last weekend.  13 months ago I hit the 3000 sub mark so a 60% jump in that time period is pretty solid.  The good thing is as your subscriber totals increase your videos get suggested more often to random viewers which can have a snowball effect on your channel to the upside.  I plan to do some sort of “Thanks for 5K” video over my extended four day weekend coming up.

I posted this to my FB page the other day, it’s so true but so commonly overlooked. 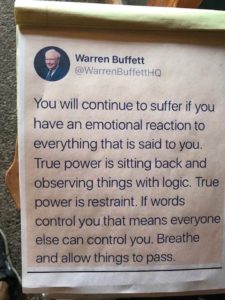