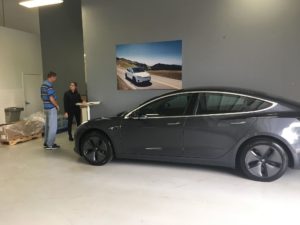 There was a LOT of big moments this weekend but non bigger than picking up the new Tesla which happened Friday afternoon.  I left work early and met Cindy at home.  The plan was to drive over in the Tacoma which Cindy could drive back in while I manned the Tesla.  The drive over went smoothly although I recall thinking multiple times, man it will suck if I need to come over there for service of any type.

The Tesla building is in a not so great area with a road that looks better suited for horse than expensive electric cars.  When we pulled up I saw more Teslas in one place than I ever have in my lifetime, it was crazy.  Once we went inside we were directed to our “Delivery Experience Specialist” named Shaina.  She was young, nice and energetic.  She said they were just finishing up the car and it would be just a few minutes.

After maybe a 10 minute wait she came and got us.  She took us to a back garage area and there it was, my Midnight Silver Model 3.  It looked as sharp in person as it did in pictures.  Cindy and I both were glad we went with the color.  The orientation with the car was a little scattered and incomplete.  It was also a bit rushed because it was now approaching rush hour which we hoped to get out ahead of.  I actually was the one to remind Shaina that she needed my check from the credit union to complete the deal, she was ready for me to drive off without it.  The entire vibe I got from the place was hectic, very hectic.  There is a lot going on. 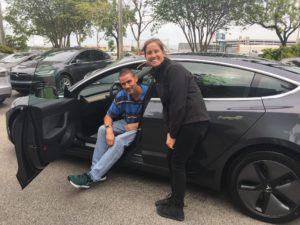 So finally it was time to head out.  I was very nervous sliding behind the wheel for the first time.  It seems very fitting that the first place we stopped was a nearby DD to fuel up for the drive across Alligator Alley.  Having the maiden voyage of the car be a 100 mile trek that included typical horrific east coast rush hour traffic was a good test.

The car was incredible, the only thing I had to adjust to was one pedal driving.  You rarely need to touch the brake pedal.  As soon as you back off the accelerator the car starts regenerating power as it slows you down.  The sensation is a bit jolting at first until you get a feel for it which does not take very long at all.  Once we got out onto the highway I gave auto pilot a test.  It’s a bizarre feeling at first having the car keep you centered in the lane as it monitors all activity around you.  As I got more comfortable with it I tried some more advanced AP features like lane changing and I even had it take the exit off I-75 for me without my input.

The power and acceleration of the car is staggering.  I have owned a lot of V-8’s over the years and none of them compare to this sort of sensation.  The car pulls like a beast from the first millisecond.  You can feel the foam in the seat back compress as you are pushed deeper into it as the speed increases.  This isn’t something I will be dipping into all the time but man it sure makes merging into traffic a piece of cake.  When Cindy drove it later she too was amazed and just how powerful the car was. 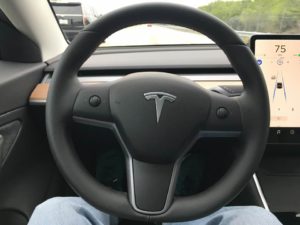 There was one negative from the first drive which I didn’t really notice until we got up on the highways.  The steering wheel is misaligned.  When the car is traveling straight the wheel is pointed maybe 5-10 degrees to the right.  It’s annoying and something others have told me they had with their Model 3’s as well.  The thing that makes it REALLY annoying is to correct it I likely will have to travel back to Dania Beach as there are no closer service centers to me, ugh.

We pulled into the driveway at home safely.  When I started the battery was around 88%, when I got home it had dropped to 35% so that wasn’t bad considering the distance.  I plugged the car in and it started refueling as it should.  I was actually surprised how fast it recharges.  Even after drive across the state it took less than five hours to recoup that energy.  Of course I shot a video of the initial journey.

On Saturday I tended to my normal tasks before heading out for some errands like getting a new tractor battery and a few items at Home Depot.  As you can imagine I spent a lot of time fiddling with the Tesla figuring out how some stuff works.   I realized that certain features I thought all Model 3’s had was incorrect.  Floor mats, enhanced Google maps, rear heated seats, and a few other items are reserved for people that paid the extra 10k for the longer range models.  I also was scratching my head as to why certain features like enhanced summon were not a menu item for me.  Evidently my car is a few software revisions behind.  Once it updates itself the features should be available.

I couldn’t mess around too long because we were going to see Avengers Endgame at 2:30 on Saturday.  I could not believe how full all of the showings were, despite them having one every 15-30 minutes.  We were lucky to find three seats together as Katie went along with us as well.  I have been waiting for this movie for what feels like forever.  I was so excited to find out how it all ends.  Of course it is too early for me to say anything that would spoil the movie for others but let me just say it was incredible and is my favorite Marvel movie of all time. Yes, to me, it’s that good. Despite being three hours long, length never was an issue for me.  Every moment of the movie had something interesting, entertaining, funny, or tragic. I definitely need to see it again at some point.  They did an incredible job of wrapping up 10 years of Marvel movies in such a satisfying manner.  A++

On Sunday morning instead of riding we went to get chicken supplies at Tractor Supply.  Speaking of chickens, I think Daelin has officially worn out his welcome.  He is terrorizing the hens on a daily basis and Cindy and I are both beyond sick of it.  Kathy, who used to always be by my feet now just hides in corners so she doesnt get pinned down and bitten by the rooster.  Even Kristen, who was one of the only hens that would stand up to him has now given up and just runs around in fear as Daelin chases her.

The chickens have always been a source of enjoyment for us.  Daelin has turned it into a source of anger, extreme anger at times for me.  There have been moments that even I, the ultimate animal lover, can feel the urge to simply end him.  So anyway, Cindy is looking into ways to get him out of here.  In a way, even with as furious as he makes me, I feel bad getting rid of him because obviously he will not find himself in a better situation elsewhere although he is too dumb to know it.  I can chase him around the yard and the second I turn my back he is back to doing the same behavior I chased him for, dumb bird.

I spent a good chunk of time during the day messing with the solar panels.  Someone pointed out to me that my panels looked too flat.  When I installed them my simplistic approach was, we live in Florida so just point them up. What I didn’t realize is that even though we live in the south, the optimal angle for the panels varies by almost 45 degrees during the year which amazed me.  For example, in May the optimal angle is a 10 degree pitch, when I check the angle of my panels they were 4 degrees.  The angle can make a big difference in the power that comes in during peak sun time. 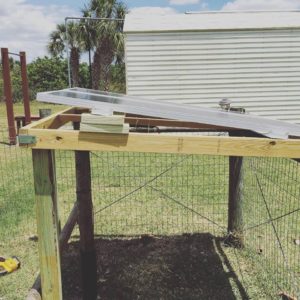 I had bought an angle mount I wanted to try on one panel before installing it on the other.  Well it turned out the bracket was for the smaller 50W panels, not the 160 watters I am running.  I found a suitable bracket but in the meantime I rigged some more elevation with some 2×4’s.  It got me to 8 degrees of tilt so it was better than it was.  I did set a new max input to the Yeti over the weekend.  At one point I saw it climb all the way to 306 watts of input power.

Cindy and I took the Tesla over to the school, thinking we were going to test the Enhanced Summon feature where the car can come to you from a parking spot.  Little did I know I didn’t have the feature yet so the test was a big fail but it still made for a pretty funny video.

This morning my very hectic week started with two tests.  I had an ultrasound on my thyroid and then followed with a treadmill stress test.  The stress test was tough as they kept raising the angle and speed to try to get my heart rate to 169.  By the time it got there I felt like Dolf Lungren in Rocky 4 when he was running on the uphill treadmill.  The lady administering the test was surprised it took so long for me to get to that target heart rate.  The funny thing is I was running shirtless, in my work pants, it had to be quite a strange visual.

This is a weird week where I leave tomorrow evening for Tampa where I am having a two day IT conference Wednesday and Thursday.  I then haul back here Thursday night and report back to the office Friday.  I haven’t had an out of town work thing in quite awhile but it should be good information.  I plan to bring a PEV along to keep me company.