So I was up bright and early Thursday morning for my cross state trek to Dania Beach to get three things addressed on my Model 3, the paint run, misaligned steering wheel, and installation of the homelink kit I bought.  The drive across the state went smoothly, especially since I was able to use Auto Pilot for most of it.  I had packed a bunch of stuff to keep me busy during the day, my laptop, a book and even one of my EUCs. Imagine my surprise when the service guy told me he was getting the keys for my loaner vehicle. 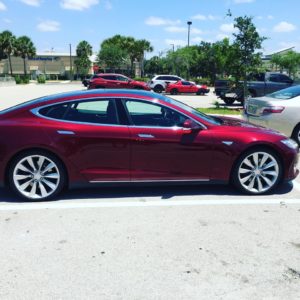 He said they will be sending the car to the body shop for the paint run and it will take a couple days.  I thought they planned to try to sand and buff it all the same day.  I was mistaken.  Of course it would have been nice if this was communicated to me ahead of time but oh well.  The nice part was my loaner vehicle was a Model S 85 Signature series, a car that cost over 100k back in 2012.

So I moved all of my junk that I brought with me into the Model S along with other important items like sunglasses, the EZ Pass, and Altoids.  I had never driven a S before, there are quite a few differences from the Model 3 besides the obvious size difference.  The inside of the car is more conventional with an instrument cluster in addition to a monster sized screen in the middle, which is rotated 90 degrees from the M3 screen orientation.

Back in 2012 they had significantly less tech in the car, it is sort of “dumb” compared to an M3 with no autopilot, autosteer or even adaptive cruise control.  I did enjoy the larger dimensions immediately, the S series definitely fits someone with my long arms and legs better.

The drive back across the state went well although I did have a bit of range anxiety.  Originally navigation estimated I would only have 5% of my battery left at the end of the trip.  It advised me to keep my speed below 70MPH to ensure I got back.  I later discovered that the climate system was cranked down to a bone chilling 60 degrees.  When I adjusted it up a dozen degrees I had a little bit more padding in my journey, when I got back it showed I had roughly 25 miles of range left.

So I had planned to spend pretty much all day on the east coast.  Instead I was home around lunch time.  I couldn’t squander that time and decided to get out and mow the property which was shaggy in certain spots.  I tended to other small tasks to try to get ahead of the work curve for my extended holiday weekend.

On Friday I continued the trend of working ahead, running errands and doing chores which normally would be relegated to the weekend.  I also got my latest blood tests out of the way,  The woman pulling the blood asked me three times if I was ok as she saw the sweat piling up.  I assured her I was fine as I just hoped for her to get it over with.  She pulled at least 7 or 8 vials.  I figured out a way to make a video out of this as well.

One of those errands involved me stopping at Costco to get a couple things.  As is often the case, I walked out of there with something I didn’t plan to get on the way in.  This time it was a touch free Kohler kitchen sink faucet.  Our faucet has been going downhill for a while.  It sticked badly when trying to rotate side to side, so much so that it actually was rotating the entire fixture.  I have been trying to skate by for a couple years by spraying the sleeve with WD-40 but even that is no longer working.  I had wanted one of those no touch faucets for awhile due to their much cleaner on/off mechanism that only requires passing a hand under a sensor.  When I saw Costco had one I threw it in the cart.

I wasn’t looking forward to the install.  Our kitchen sink is really deep so working on the faucet is not much fun.  I was pleasantly surprised that the installation was actually straightforward.  It was more difficult removing the old fixture, the Kohler install was very clean and trouble free.  My test runs of the faucet went great, the sensor works perfectly and the faucet itself is very easy to move and has a strong magnet that snaps it back in place if you pull out the hose for cleaning.

Right around the time when I started the faucet work Cindy told me that Katie was going to the hospital, she was feeling some things that made her feel like the time had come.  Once Cindy got to the house she quickly packed her things and was off to the birthing center.  I stayed home to man the homestead as I had no desire to experience the miracle of childbirth first hand.

I got a call a little after midnight that it was all over, the baby was born and everything went smoothly.  Originally I expected Cindy to stay there overnight but she actually came home in the middle of the night to catch a few hours of sleep before she headed back in later this morning.  I headed there mid-morning but stopped at Pinch-A-Penny on the way to order a new pool pump.  My 18 year old unit is leaking badly and is probably five years past needing to be replaced.  I have popped the capacitor on it four or five times.

When I got to the birth center Cindy and her ex-husband’s family was there.  Baby Daniel was being held by Mike.  The baby has a full head of dark hair which you don’t see very often.  Cindy was anxious for me to hold the baby since I didn’t even want to touch Katie’s stomach when he was inside.    Holding him was fine, he looked at me a bit and then sort of napped.  Holding a baby feels very unnatural to me but I have a feeling it won’t be that way for long.

Daniel came back and I handed the baby off to him.  The whole gang then headed out to go take some naps.  I probably could use one as well since I didn’t get much more than five hours of sleep but I have stuff to do.

After the birth center I ran to Home Depot to get some parts to allow me to run a stand alone sprinkler in the chicken area.  With it being dry season I have been spending at least 20 minutes a day manually watering the grass in there that I added as part of the elevation project.  The last thing I wanted was for my $500 in sod to turn into dried up hay.

I put a two connection manifold on the well hose bib.  Getting off the hose that was originally attached there was a Herculean task.  It felt practically welded on.  I sprayed it with some PB Blast and used a huge pipe pliers to break it free.  I was applying so much torque that the hose bib was starting to bend in it’s PVC mount point.  I was dangerously close to breaking the fitting but thankfully it started to turn before the breaking point was reached.

I connected a second hose to a manual water timer that I can use to have the oscillating sprinkler run for any period of time up to two hours.  My plan is to just turn that on in the evening for maybe 30 minutes and go about my business.  It should be a real time saver for me.  I have two more days to try to enjoy myself, most of the work is done.  Katie and the baby aren’t due to be released from the hospital until Monday, that is when the real fun begins.