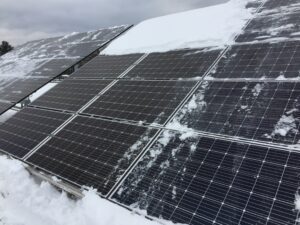 Yesterday I met another solar salesman at the house named Troy.  Troy had sold a solar/roof combo to my buddy Matt and was referred to me.  We walked the property and surveyed the install.  Much like the first company, the news that I wanted to do a ground install was not a good thing in his eyes because of the extra expense and from what I discovered later, some technical challenges with their system.

Before long we went inside where I presented him with my electric bill so he could run the numbers, even though I sort of already knew the numbers from the day before.  Troy was a very likeable guy but also a very obvious salesman as opposed to a technical person.  There were several times where I corrected him on some technical details that I should not have had to.  At one point I asked him a somewhat technical question and instead of answering it he had me watch a YouTube video that explained it.

There was also an awkward 15 minutes or more where he could not get into some website that he uses to generate quotes.  Evidently he forgot his password and then for some reason had incredible difficulty resetting it.  It got to the point where I started to unload the dishwasher while he futzed around with his account credentials.

With the first sales guy he had a formal proposal that laid out all of the equipment, installation outline, warranties, specs, and more.  Troy had none of that, all he basically had was numbers calculating the loan details which was a bit of a turn off.  When I later asked for information on the hardware he texted me links on the internet.  I really sort of felt a bit like I was in a car sales scenario where the main concern was making the monthly payment work and little else.

So like I said there were some technical differences with this second system that made it seem less suited for a backyard install with a long run to the house.  This system uses “power optimizers” on each panel which allow you to monitor the output and health of each panel but they are DC-DC devices, meaning they output DC power.  DC power does not travel well over distance, hence why our power grid runs on AC power.  Putting the array in the backyard with this config would be problematic. The system from the first company uses a “micro-inverter” on each panel.  These devices also allow you to monitor each panel but more importantly they convert the DC coming off the panels to AC, which makes a long run to the house not a big deal.   This was an important difference for me.

There were some positives for Troy’s equipment.  Supposedly the panels were higher capacity, 360 watts versus 300 watts so it would require less panels for the same production.  Also in the final quote Troy included a few extra panels that would negate the small output degradation that can occur over years and years.  They had the same financing rate as the first company which was lower than what I get on my home equity line of credit so that was a wash.

Troy was quite the talker, he spent something like two and a half hours at the house, which is probably more than double what I expected.  Like I said, he was definitely a salesman.  I thanked him for all of his info and he said he would follow up with me on Friday to see if he could get an agreement out of me.

After Troy left I looked at some of the links he had sent on the equipment used.  It all looked fine if I was doing a roof install but both Cindy and I really prefer having the solar array in the back yard which is mostly just wide open, unused space anyway.  I also was a bit turned off when I looked at the the website for Troy’s company which was on his business card, which look like he designed himself.  The website had basically no information on it and looked like a template that was thrown online rapidly, again a huge contrast to the professional site and presentation I got from the first company.

I emailed the sales guy from the first company and told him I have another quote for about the same money with slightly higher output.  However I told him that if he would agree to include a backyard install for a number about $2500 less than his initial  quote, I would be agreeable to doing business with them.  I got a response back within the hour that said they could do that, which made me feel like I should have asked for more, lol.

I also talked to my dad last night since he went through the solar process at his house in Marienville, again with a ground mount array that was a massive 300 feet from the house.  He had some tips and advice based on his experience which was helpful to hear.  He seemed genuinely excited about the idea of me going solar, following in his footsteps, even though since he moved he is no longer harvesting the sun.

So anyway, much like my Telsa purchase that rapidly went from a fleeting idea to reality in a few days, it is looking whole house solar might be following the same path.  The more I think about it the more comfortable I am with the idea.  Being able to simply redirect money I am already spending with the utility company to a solar system without forcing me to alter my budget one penny really seems like a no brainer.  Electric company rates are only going to rise over the next two decades while my solar system payment will not.  Once I pay it off in around 10 years the rest is gravy.