Cindy got most of the remaining items that were displaced for the carpet work back where they belong yesterday.  It felt good to come back to a house that was more or less back in order, I never feel good when piles or clutter are around.  One of the things I did last night was edit the video I shot documenting the fun process.  (spoiler, it wasn’t fun) 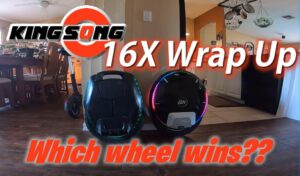 I forgot to mention yesterday that someone finally took me up on an EUC trade offer that I have been putting out there on social media and YouTube videos for awhile.  I offered to trade my like new Nikola Plus for a King Song 16X, the wheel I demo’d a couple months ago.  When I demo’d the wheel I found myself liking it more than the Nikola, a wheel I liked very much already.  I have been trying to be a bit more reasonable in my PEV buying habits recently so instead of spending another 2K for a new 16X, I threw the trade offer out there.

From a dollar perspective it was a good deal for someone as a Nikola Plus cost roughly $500 more than a 16X.  Despite this, I couldn’t get anyone to make a deal.  Finally this weekend someone agreed to the trade. His 16X has roughly 150 miles on it, my Nikola only had 120 miles so it was pretty close.  We both shipped our boxes out on Monday and by the end of the week we both should have received our wheels.  To me the Nikola was better than the 16X in only two ways, it’s top speed which pushes 40 mph, (which I would never ride at), and it’s LED lighting is more visually interesting.  In every other way I prefer the 16X.  It should make for interesting video content.  A few people think I’m crazy but most seem to agree that overall the 16X is a better wheel.

Last night after work I had the cousin of the guy that detailed my truck stop by.  He brought one of the skateboards he sells so I could use it to prototype a stand that he could use to display his boards in a store.  Matt was extremely nice and seemed like a very genuine person.  I put the board in the stand I made for my Meepo and it stood upright albeit in a little tipsy manner.  I need to do a few modifications to make the stand a little more stable and also include their logo into the design.  If this works out it could lead to yet another avenue for additional 3D printing work which is good and bad at the same time.  The amount of my time consumed by this hobby turned into a side business is growing at an accelerating rate.