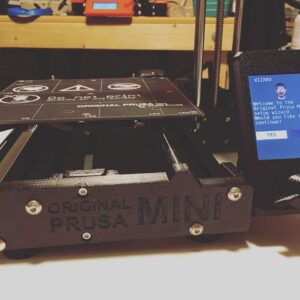 Prusa announced their new product back in October 2019, the Prusa Mini.  I ordered it on the first day possible and it supposedly was going to start shipping the beginning of November.  That ship date came and went with the wind with reports of various production delays and bug fixes.  The end result was a three month delay which culminated yesterday with my Prusa box finally arriving on my doorstep.

Last night I assembled the printer.  Luckily it was mostly built, I had everything put together in about an hour, a fraction of the time I spent when building my MK3S.  I got right up to the point where you go through the configuration steps and first print which I will tackle this weekend.  So far the little printer seems cool.  I am going to have to do some thinking about how I want to arrange my printers in the room to accommodate the new addition.

Today the roofers are coming to replace all the metal on the front of the house.  Just like the west side roof, some of the metal panels on the front have a different appearance, making the roof look bad.  After spending 20K to replace it I am not ok with it looking bad.

This issue was apparent from day one and I brought it up to the project manager.  He assured me over time the metal would “weather” to look the same.  Well we are now closing in on two years and the difference is as noticeable as ever.

I find myself annoyed that I have to even deal with this.  I told them that I thought the installers should have spotted this defect as the metal was being put on.  I was told that when they are up on the roof it wasn’t apparent.  I remember asking if that meant that once they were back on the ground nobody looked at the roof??

When I got them to come out to replace the west side panels I should have had them replace the front as well.  I’m not sure why I didn’t push for that.  However again, I feel that if your business really cares about doing it right, they would have proactively fixed it all as there was an obvious consistency problem with the metal that was used.  It felt like they only want to do the bare minimum required.

So I initiated getting the front panels replaced back in November.  It’s taken this long with repeated reminders from me to the company that I wanted the work done.  I have been more patient and less vocal than I normally would be because my contact at the company is the husband of a co-worker so I don’t want to drop the hammer too hard. So the metal was dropped off earlier in the week and a crew is at the house right now finally doing the work.  I am crossing my fingers the work is completed to my satisfaction so I don’t need to get frustrated every time I pull up in our driveway.

This weekend I have lots of smaller projects to tackle, standard fare, mostly.