Since the Covid 19 pandemic really took hold in the US, Donald has had to eat his words, repeatedly after he ignorantly downplayed the significance of the virus by an unimaginable degree.  Since then there has been exactly one time I have seen Donald talking where he didn’t come off as the egotistical blowhard as we are all accustomed to, however after that one exception it has been back to all asshole, all the time.

What in the world happened to Mike Pence leading the Covid 19 response? Sure Pence thinks we can “ungay” people but at least he is a competent communicator. Instead the VP show lasted all of a day or two until evidently the President could not tolerate Pence getting center stage.  So instead we are treated to Trump awkwardly reading pieces of paper in a manner that would make many third grade teachers cringe.  Why is it that he refuses to use a teleprompter like every other president of the last 30 years?  Is it because he can’t use a sharpie to write “chinese virus” on the screen? It’s incredible.

So anyway, watching Trump news conferences have been cringe worthy as he says things that you can see the medical professionals on stage physically react to, as they are so ridiculous.  Repeatedly Anthony Fauci, viewed as one of the leaders in the medical community regarding the pandemic has had to walk back stupid and erroneous statements Trump has made.  It has gotten so bad that Fauci said ‘I can’t jump in front of the microphone and push him down’ , speaking about the falsehoods Donald is telling the masses. It’s madness.

For me the madness and outrage climaxed yesterday when Trump said that he is thinking of lifting restrictions after the initial 15 day social distancing order expires next week.  You could see the woman on stage who is another medical expert look absolutely sick as he said this.  This idea has no basis on advice from ANY medical professional, this is solely about Donald being worried that a cratered economy will hurt his reelection chances and nothing else.  He is so concerned with his self preservation that he is willing to throw the well being of millions of people into the wind, despite knowing the medical infrastructure is unable to handle a sharp spike in cases.  He doesn’t give a fck, plain and simple.

I was thinking to myself how Trump supporters all suffer from the same mysterious ailment.  It’s a condition where you are unable to recall anything the President has said previously.  Instead, the moment he says something new that totally contradicts something he said previously, you instantly erase that prior action/statement from your memories forever.  I don’t really understand how a functioning adult would be unable to remember past actions by the President but without a doubt the affliction is real, and frightening.

So the good news here is it is the state governors are the ones that make the call on social distancing or shelter in place orders, not President Big League. So even if he does something  moronic and say “all is clear”, there are measures in place to ignore it.  I can only hope somebody up there has the ability to drill some sense into the man but based on his track record, anyone with the balls to tell Trump he is making a mistake gets shown the door.

I have been doing some 3D printing with a new material, PETG on my Prusa printers.  I have now twice had a print destroy the build surface when I tried to remove it.  I was using Prusa filament so it seemed very odd that I would be having this problem.  I posted a picture of the damaged build plates on the Prusa Users FB group and within seconds had my answer.  Evidently when printing with PETG Prusa recommends you first coat the build surface with glue stick.  Some in the group said spraying it with Windex accomplishes the same thing.  This acts as a barrier to prevent the PETG from sticking like cement.  They said this is explained in the Prusa manual, I guess I never got to that page. 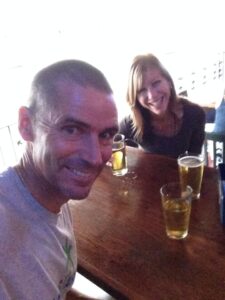 Today marks the seven year anniversary of when Cindy and I started dating.  It seems insane that much time has passed already.  The seven years have been filled with so many memories I can’t even begin to sort through them all.  We seen so many things, taken on so many challenges and accomplished much along the way.  We make a good team.