Last night I shot a quick video outlining the simple fix for what I was beginning to think was a complicated problem.  I like to make videos when I have an “aha” moment so I can potentially save someone else from going through the same hassles I encounter from time to time.

I had another PT appointment today.  The shoulder is ok to get about my day but certain movements, especially something involving raising the arm in an extended position is uncomfortable.  When the therapist was massaging and moving my shoulder around he felt some crunching, which I also felt yesterday when I tried to do a few pull ups.  He suspects I could have some sort of labrum tear going on in there but if it is, it’s been around for a long time as shoulder pain has been a thing for me for at least a decade.

He had me do some movements with a 1 pound dumbbell which sounds ridiculously light but it is all that is required for these exercises that target small muscles in the shoulder.  The movements felt very uncomfortable at first but dulled a bit as the reps continued.  My homework is to continue doing these exercises as I can.  It sounds like the therapist wants me to keep coming for a little while while my hope was to go this week and be good to go.  I didn’t expect to be healed and pain free, I just wanted a treatment plan that I can follow myself as I don’t need babysitting.  The ending sooner rather than later hope I had is reinforced by me having to plunk down a $35 copay for every visit. 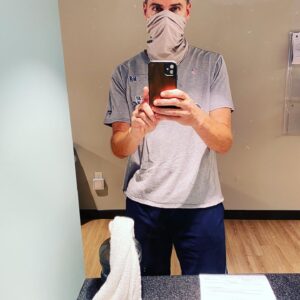 I went back to the county gym for the first time yesterday.  It reopened it’s doors on Monday.  I wore my buff for the session which isn’t all that much fun.  When I arrived there were two other people but for most of the workout I was solo which is nice.  I did lower body weight training which felt odd after the layoff but good.  I did try a few pull ups but bailed after 8 reps because of a persistent and disturbing crunching sound coming from my right shoulder.

Instead of hopping on the cross trainer for 15 minutes of cardio at the end I instead fast walked up the parking garage.  The gym closure exposed me to some alternative ways to exercise and spend my lunch hours.  I don’t plan to abandon those options entirely.  Instead I would like to add them to the rotation to provide more variety.  The tricky thing is going to be doing upper body weight training that does not exacerbate the shoulder issue.