I felt a bit bummed yesterday that we canceled Patrick’s visit because although it looked overcast and rainy for a good portion of the day, precipitation was actually quite limited.  Like I said, he will be down here in Florida for awhile yet so rescheduling isn’t a huge deal.

So Katie texted Cindy yesterday to let her know that once again the Prius would not start for her.  I wasn’t shocked although I hoped my drive on Sunday was enough to get the 12V battery up to functional levels, it apparently was not.  I theorized that depending on how long the car had been left in this dead state that the battery has drained dangerously low, perhaps to the point where it can’t even be revived, despite it being less than two years old.

I came up with a plan to go to Katie’s, jump start the Prius again and then drive it back to our house so I could throw the battery on my charger to hopefully get some electrons back into it while Katie and baby DJ hung out.  Since it was DJ’s actual birthday we wanted to spend time with them anyway.  I had the car on the charger for several hours and when I disconnected it was able to fire up on it’s own.  The real test will be to see if it will start after sitting overnight.  If it does, great.  If not it will be time to buy another battery which is a pretty expensive ticket for the Prius. 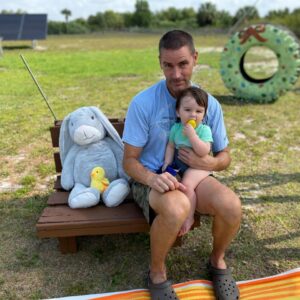 As is always the case the visit with Katie and DJ was fun.  DJ had a great time in our pool, he just loves water.  When it was time for them to go I was holding him while the car seat was being prepped.  I then placed him in the seat and as he was getting buckled in he reached for me like he wanted me to pick him up.  When he realized I wasn’t he started to cry which broke my heart just a little bit.  I love the little guy.