Friday at lunch I ran the parking garage at lunch for the fourth week in a row.  It seems that full summer temps and humidity are now upon us which makes each one of these sessions just a little more grueling.  I do get a higher degree of satisfaction scaling the parking deck ramps than I do running laps around the track at the school.

When I got home Friday night I saw that Cindy had been very busy.  She dug into the bushy areca palms that surround the small pond giving them a major trim which made the area look much nicer, maybe a little too nice.  Cutting back the palms exposed just how badly the pond needs to be redone, it is filled with inches of sludge and the pond liner is dry rotted and brittle.  The end result was my buying another liner at Home Depot that will get installed after the disgusting job of removing the old liner is completed.  I got the process started by popping a bunch of holes in the old liner so the water could drain out, leaving only sludge and other organic matter behind.

On Saturday I was out mowing when Deb arrived, she wanted to watch the Space X Dragon launch as did we.  Cindy came out and got me with about 5 minutes to go. I have always been fascinated by space and used to love watching shuttle launches.  As the countdown moved towards zero I had legit goosebumps from a combination of excitement of what it means to be flying humans into space again from the US and fear of something horrible going wrong.  The launch instead went perfectly, it was awesome to witness.  Hell the first stage even landed back on the drone ship intact as planned.  Elon is the man.

After the launch I went right back out on the mower to finish up.  The last 15 minutes of mowing occurred in a torrential downpour.  I was too close to being done to call it quits.  Nothing short of a direct lightning strike was going to get me off the tractor. Deb brought the printer I gave her back for the third week in a row.  I have been trying to fix an issue where prints were not adhering properly.  After several fixes didn’t work this time I applied a PEI surface to the print bed and did a few test prints that turned out well which I was glad to see. 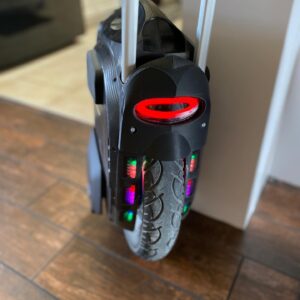 I spent a lot of time this weekend working on the new model I mixed together for my MSX EUC.  It is a part that serves as a bumper for the rear of wheel.  It looks cool but also will help protect the case if the wheel goes down.  It has been a challenging model to print completely.  Three times I had one come off the bed after roughly 90% of the print was complete.

On Sunday I got out on my wheels to ride for the first time in a couple weeks.  I had three of my wheels with me to do a jumping test, an idea I had for awhile.  I wanted to ride across a speed bump at speed in a development to see how much air I could catch.  If you watch the video you will see that I caught very little air.  I had more success when I hit the smaller but steeper speed bumps in the school driveway.

I then grabbed my MSX and did a quick ride out to Ave Maria and back.  It was so damn hot and humid by mid-afternoon that I just didn’t enjoy the ride that much.  I tried to push speed as much as I could to get out of the sun.  The top speed I hit during the trip was over 34mph.

When this happens the focus and original message gets blurred by the violent end results which in the end does not cause appreciable change.  Of course me too lemming mentality kicks in and it soon becomes nothing about George Floyd but rather just an excuse to break shit, burn shit, and steal shit.    If our country did not have enough to choke on already with the Covid 19 mess and Trump’s never ending carousel of idiocy, this is just a big rotten cherry on top.  The disgusting racism that is at the heart of incidents like this is something held near and dear to the heart of so many Trump acolytes.  2020 is just one big nightmare I would love to wake up from at some point, hopefully on November 4th.