As I was out doing chicken duties bright and early on Saturday morning I heard the sound of a running motor.  I looked up and saw Miguel on his sod roller pressing down some of the grass in front of the fence.  I continued finishing up my work, I planned to check in on him when I was finished.  As I was still working I realized I no longer heard the motor running.  I once again look the same direction and still see the sod roller, this time parked, turned off, with nobody on it.  When I was done in the chicken area I walked over there.

Miguel was gone.  It looks like he rolled about a 20×40 area and then took off.  I figured he had to do something and would be back.  Nope, the roller has sat in the same spot all weekend.  I texted him yesterday asking when he was going to finish up.  Of course I got no response, unreal. Maybe I’ll fire up the roller and do the work myself. 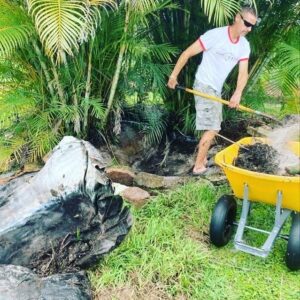 On Saturday we started work on ripping out the old disgusting pond.  I filled two wheel barrows with sludge I shoveled out of the old dry rotted pond liner.  Standing in there was treacherous as the sludge felt like ice.  After sufficient sludge was removed I was able to rip up the old liner with whatever organic material was still in it.

The pond is two tier design.  The upper part is a plastic molded pond.  The lower part used to a plastic mold too until a mini-tornado ripped it out of the ground somewhere around 15 years ago.  After that happened was when I bought a pond liner and threw it in there instead.

When I pulled out the old liner much of it cracked in my hands from years of exposure to the brutal Florida sun.  The shape underneath the liner still more or less had the shape of the original plastic pond which had an uneven surface.  I decided I would like to dig out the bottom a bit to make it equal depth.  Well that was easier said than done.

The overgrown areca palms that started out as three foot high potted trees have filled every square inch of ground around there, including under the pond, with roots.  Just digging out the relatively small section so it was equal depth took way more effort than I first anticipated.

Next up I had some pond liner blanket ready to go in the shed.  By putting this down first you protect the liner from getting holes poked into it from below.  I then drug out the new liner.  The piece I bought was big enough that I could fold it over in half and still have enough material to cover the pond, another nice bonus to increase life and durability of the reborn pond.  After giving the liner a rough trim we pinned it along it’s edge with the big heavy castle stones we already had.  After another trip to Home Depot we loaded up on large, round river rocks to cover the bottom along with smaller pond pebbles to be used along the edges. 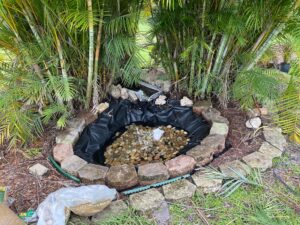 I set up the new fountain pump I bought a few weeks ago to circulate water from the bottom to the top tier where it waterfalls back below.  At that point the majority of my work on the project is complete.  Cindy is planning to do some cool landscaping around the pond.  The end result will be us having a water feature that we actually enjoy looking at instead of wet, muddy, black hole that we ignore.

So when we came back from one of our Home Depot runs on Saturday Cindy and Deb walked into diarrhea which evidently came from Sadie.  I had forgotten to walk her before we left so it was my fault ultimately. However ever since we picked her up on Thursday she had been acting like she had the runs.  Instead of looking to poop a couple times a day, every single time we would go outside she would go shuffle off in poop position.  If there was anything coming out it had to be minor because I could not see much of anything from a distance.

Well this behavior continued throughout the day on Sunday as well.  She was just acting like she constantly felt unsettled in her gut.  Sadie has had GI issues her entire life but this was abnormal, even for her.  So last night I took her out right before bed.  She actually only pee’d at that point so I thought that maybe the feeling of poop urgency was finally waning for her.  Boy was I wrong.

My first wake up came at 12:30 when she was sitting by the bed making noises at me.  At least she lets us know.  I took her outside and I heard some wet farts but nothing else really going on.  She circled around for awhile before feeling safe enough to come back in.  Ok now I can finally get some sleep, not.  I got another wake up at 2AM and the same thing occurred outside, circling, some noises, but nothing much I could make out under the light of a full moon.  I was very conscious of not wanting to wake up Cindy so I made a command decision to stay out in the main living area with Sadie.

At first I thought I would just work on stuff and maybe play some WoW.  I did get a couple stand orders processed but after I read my email I was utterly exhausted.  I decided to try out my Secret Lab gaming chair as a sleeping apparatus.  The high end chair is comfortable, fully reclines and has a substantial pillow.  I turned off the screens to my PC and reclined the chair back.  I closed my eyes and stayed there until a little before 6AM when Sadie had to go out again.  I slept maybe an hour or two out there but it was miserable sleep if I got any at all. I was constantly listening for any signs of intestinal distress from Sadie who was laying on the floor next to me.  I was also chilly as I was only in my boxers.  My only “blanket” was crossing my arms over my chest.  It wasn’t an experience I am looking to repeat anytime soon.

When I got up I looked up side effects of the NSAID based medicine Sadie has been on for a couple weeks.  Of course the side effects are vomiting and diarrhea.  Oh I forgot to mention I stepped in Sadie’s dinner which she threw up in the bedroom during the night.  I told Ali about the listed side effects and said I don’t think she should keep taking it.

Cindy dropped Sadie off this morning.  Hopefully after a couple days without the meds will get her feeling better.  She looked absolutely miserable this morning before I left for work, I felt bad. I felt especially upset considering what happened with Maggie. Sadie is starting to slow down as well. Her back legs have been giving out now and then.  I really want to make an effort to keep getting her out to the house as much as I can since she has much greater freedom of movement on the property.

As I mentioned briefly Deb came out to visit Saturday evening.  As seems is always the case, the three of us had lots of fun and laughs along the way.

The weather all weekend was overcast with an abundance of rain, curtailing any formal EUC riding.  The only content I posted was a brief test of the water shedding capabilities of the 3D printed mini-mudguard I started selling on the store last week.