So in what seems a blink of an eye my 5 day weekend is over.  I’ll do my best to recap it in an abbreviated fashion.  I wanted to get most of my weekend work done on Saturday as I was supposed to drive to the east coast to pick up the KingSong S18 demo wheel on Sunday.  Some of that work included mowing the grass, weeding, and the other normal chore tasks.  When we went out to run errands one of those stops was Lowe’s.  I finally decided to officially pull the trigger on buying a new lawn tractor.  I ordered a Husqrvana TS 242XD. 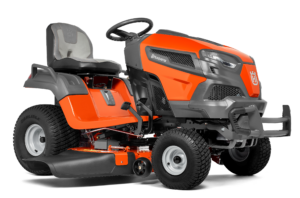 It’s a 42 inch deck as I have now.  I intentionally chose a shorter deck because it allows me to access certain spots on the property which would be a huge PIA with a bigger deck.  This unit has the high quality Kawasaki engine, an electric PTO, LED lights and a few other features. The biggest reason I went this route is I wanted a tractor with a welded, fabricated deck that utilizes stronger and thicker metal.   All my prior mowers have had shitty and thin stamped metal decks that fall apart.  This mower is not stocked so it is supposed to be delivered next week.  Cindy’s military discount really paid off as it saved me nearly $300 on the purchase.

We left after lunch on Sunday in the Tesla to pick up the wheel.  When I mapped out the ride ahead of time I was surprised to find out that they put in a supercharger at the Indian rest stop that is halfway across Alligator Alley.  The drive over to Pompano Beach was quick and easy, the car drove itself for most of the alley.  When we arrived Mickey gave me some quick pointers on the wheel as we did a fast ride to Dunkin Donuts which was right around the corner.  Hopping on the S18 for the first time felt foreign but in a good way as I could feel the suspension helping to absorb bumps.  We didn’t stay very long as we had to drive back across the state where we stopped at the Ochopee super charger which gave us enough juice to get home in less than 15 minutes, less time than it took to use the bathroom and go into the gift shop.

The period of Sunday night through Wednesday evening was a non-stop blur of EUC riding, video production with a few chores thrown in while the wheel was charging.  For example on Monday we picked up 30 more pieces of sod to throw on the front house mound.  We got it at somewhere other than Home Depot which was actually quite nice.  The sod was better quality and about a buck per piece cheaper.  I also found the time to weed whack the property which was getting jungle-like in certain spots.

As far as the EUC part of those days, feel free to consume as much of the 9 videos that I produced as you can tolerate.  My time with the wheel included riding to Dunkin Donuts, riding through the swamp, jumping the wheel in the back yard, and taking it for a long nearly 35 mile ride out to Ave Maria and back.  The whirlwind schedule has left me sore and tired but with the realization that an EUC with suspension is not a novelty but instead a real improvement in the riding experience.