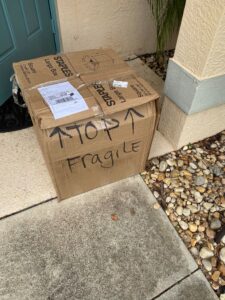 Friday when I got home I was welcomed by the box my used Prusa arrived in.  Despite the efforts by the seller to mark the box as FRAGILE, UPS looked like they tossed it around like a football.  The top of the box was crushed and it looked like lid was opened and sloppily re-taped.  I was frustrated by UPS not being able to read or just not giving a shit.  I was lucky, the printer still was intact and printed just fine.

On Saturday I was grinding pretty much all day long.  In addition to normal chores I wound up doing mowing and weed whacking of the property with an assist from Cindy.  It was brutally hot and humid.  I also finally got around to replacing the piece of screen on the lanai that had a tear in it.  Cindy patched the rip by hand awhile ago but we noticed the tear had reopened.  At the time we thought it was just from exposure to the elements.   However once I replaced the screen section Cindy caught Sadie just before she tried to create her own exit point, which is how it got ripped in the first place.  Seeing that confirmed that Cindy’s patch job only failed because Sadie ripped it open, again.

Replacing that section of screen sucked as I was sweating profusely as I was alternating between sitting on a dry rotted plastic bucket that was breaking and crawling on my aching knees.  I had not replaced a section of screen in awhile so perhaps my technique was rusty as well, adding to the difficulty.  The section wound up looking nice and tight at the end which is all that matters.

When I ran to Home Depot earlier I picked up yet another security device for the chickens, a Ring Spotlight cam.  I already have a Ring device on the front of the coop, this one I wanted to put on the rear fence line.  My only concern was having the coop WiFi signal reach all the way back there which it luckily did.  This device has two way audio, bright LEDs and even a siren if needed.  I am hoping to be able to proactively monitor any coyotes that are scouting the fence line as well as possibly scare them away with unexpected bright light.

I finally got to slow down as evening arrived when Deb came over to hang out.  We watched Angel Has Fallen with Gerard Butler where he reprises his super Secret Service Agent role.  It was entertaining, with my sense of enjoyment probably chemically enhanced from the wine I drank.  I’d give it a B+.

On Sunday after paying my bills I wanted to go out on a new range test with my production V11. Supposedly there were changes made to the production model which were supposed to result in longer range of the wheel.  I wanted to test that out.  The ride took a very wet turn on the return trip from Ave Maria where I rode through rain, torrential at times.  The final numbers I came up with did not seem to be an improvement at all which was slightly disappointing.  Overall I love the wheel and the range, even if it less than I expected, is more than I would use in my normal riding situations.

While I was on the ride the fence extension materials were delivered by FedEx.  I was very surprised they delivered on a Sunday as I never knew that was an option with FedEx.  I cracked open the hardware to take a look.  The extension poles are massive but I am going to need to improvise some.  They don’t have a kit specifically made for a round wooden fence post so I ordered the closest thing they had, a pole for a split rail fence.  The mounting surface is a large rectangular plate with four screw holes.  I will only be able to use two of the four holes if I want to be able to mount into the beefiest section of each post.

The other thing I will need are longer/better screws.  The screws they include look drastically undersized and barely cover the size of the holes in the mounting plate.  I will be getting long aggressive woods screws with fender washers to apply pressure to a larger area.  I hope to start attaching poles this week after work.  It will be a lengthy process for sure.