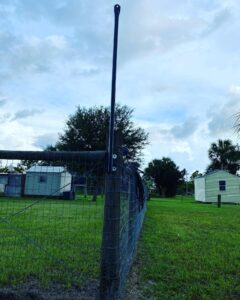 Last night after work I stopped at Home Depot to get upgraded hardware to attach my fence extension supports.  I grabbed a big box of 3 inch high quality deck screws and a container of 3/16 fender washers.  When I got home I grabbed some supports and got busy.

I decided to align the mounting plate with the top of the fence.  This allows it to be low enough on the posts so I can do additional securing down low where it matters.  I used a level to get the new poles straight from a left/right perspective.  There wasn’t much I could do on the in/out plane as most of the wood posts have some degree of bend to them.

Despite only using two of the four available mount holes the metal extensions felt locked in to the wood posts when I snugged them up.  If I didn’t use the bigger/longer screws and fender washers there was no way the hardware they included would be sufficient.  I got the back fence line done in about a half hour or so.  Tonight I want to start placing posts down one of the sides.  I would love to have the posts mostly done during the week just leaving attaching the fencing for the weekend, which is going to be interesting since most of it will require working on a ladder. 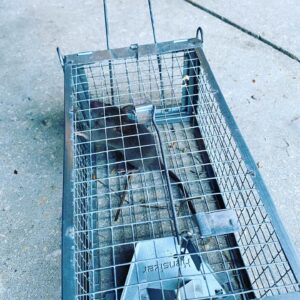 This morning as I was putting the chicken food out I noticed the live trap was closed.  I had it open but unbaited last night.  Evidently a small palm rat was curious, went in the trap and activated the door.  I have seen two of them scurrying around at night on camera so I was happy to have snagged one.  I sat him in the garage while I got ready.  I did give him a small piece of bread to eat while waiting.  When I came out to leave he had eaten it all.

We had a nice ride to the customary drop off point.  When I opened the door and told him he was free he came out the door and paused for several seconds looking at me.  In my animal loving mind it almost felt like he was saying “thanks for the bread and not killing me”.  After the pause he scurried off into the underbrush, hopefully to live a life where he does not impact human beings.

Another sad animal story happened on the property this weekend.  I started smelling something dead around the coop area.  I saw nothing at first but upon closer inspection I saw the carcass of a snake half hanging out of the hardware cloth that lines the bottom of the chicken platform.  Ironically it was probably targeting the palm rats and misjudged it’s ability to squeeze through the tiny squares and died.  I felt bad for the snake as well and sad that I had not found it and freed it before it kicked the bucket.