For many years now I have had various complaints physically about injuries and illness as I have aged.  Aches and pains would come and go but for the most part they  were short lived and I still had the core functionality to do basic strength moves like squat, dead lift, and bench press while keeping up more or less with running as well.  I would hear and see people in my age range that were in much worse condition than I was complaining about not being in shape and then rattling off a long list of excuses for that being so.  For the most part I dismissed the excuses as a veil for a lack of motivation as despite my mostly minor issues there always has been a confidence in my body to hold up to what I have asked it to do.  That confidence is fading, quickly. 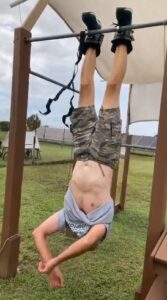 Between the shoulder injury that was rolled up by the left knee injury with a side order of lower back crunching noises, I have lost confidence in my body to do the things I once could ask it to do.  The ironic thing is these injuries all came around when gyms were closed for Covid.  I went back to basics by doing hundreds of push ups and running the parking garage which ironically seem to be what brought these injuries about.

I ordered and started using some inversion boots, hoping that allowing gravity to decompress my joints might have some benefits.  I have only done it a couple times thus far but I plan to keep it as part of my evening mini-workout I do most days.  I have spent the majority of my adult life with a focus on health and fitness.  Up until the last couple years the reward has been minimal health issues and an ability to still do a lot of the same things that I have always done. Coming to grips with the idea that that reality is starting to change isn’t something that sits well with me.

Don’t get me wrong, I’m not raising the white flag.  I’ll never give up.  Each day at the gym I still work hard.  The difference is now what doesn’t currently hurt is becoming a consideration for every workout.