Yesterday I tuned in to the live stream of the new Mars Rover landing, the Perseverance.  It was utilizing the same amazing approach to landing as the last lander.  The mother capsule drops from orbit as most reentries utilizing a heat shield.  A huge parachute is deployed and then the heat shield is ejected, exposing the transport vehicle and the rover itself.  This combo drops out of the capsule as the transport fires up rockets to continue the controlled descent.  Then just as the surface is imminent, the transport vehicle lowers the rover down on a high tech winch which I believe is about 20 feet long.  Just as the rover is about to touch down the winch is released, allowing the rover to softly touch down while the transport vehicle jets off to crash land far away safely.

Watching the animation of how this entire procedure occurs is fascinating for me and mind blowing as well.  To be able to have such precise actions take place autonomously 120 million miles away is a testament to science and how far it has come.  To see the entire control room erupt in cheers when a safe landing was confirmed was inspiring and awesome.  One of the many things I regret about being older is my window for bearing witness to just how far we will go in space exploration is limited.  The infinite depths of space has amazed me for as long as I can remember remembering.  The mission is hoping to definitively find signs of prior life on the planet and if they get really lucky, present life.  It would be a game changer for sure.

The Eagles officially shipped Carson Wentz to the Colts yesterday.  It is pretty amazing how the perception of Carson Wentz has changed since his benching based on numerous “unnamed sources”.  Carson himself has not said shit since he was benched but people around him have been chattering non-stop.  What came out made it seem like the image we all had of Carson was a bit skewed.  Once he was benched despite his outward team first statements, it was clear he was really offended by the benching.  It also became clear that Carson had a bit of prima donna in him and was not all that willing to be coached or to own up to his own shortcomings in game management.  Once that sort of stuff was circulated in the media it was like blood in the water for Philly fans.

The trade talk circus since the end of the season has been drama filled with the Eagles reportedly wanting a lot more than teams were willing to give for a QB they clearly had had enough of.  The Colts will be an interesting destination for Wentz.  He will get his opportunity to prove if this past year was an aberration brought on by a ridiculous amount of injuries on the roster.  On the other hand it could be that defensive coordinators have simply figured Wentz out and know how to disrupt his game.  Either Carson adapts/improves or he gets an early NFL exit, time will tell.

One thing that is without question is the disappointment all Eagles fans feel.  The team mortgaged their future to get Wentz, sure that they had landed their franchise QB for the next decade or more.  When you invest that much and have it fall apart a few years later feels like a divorce.  It stings and will take awhile to fade away. I do truly hope he does well for the Colts.

So as I mentioned yesterday the idea of upgrading my Model 3 for a Y came rushing into my head over the last couple days. I shot two videos yesterday.  In the first one I laid out the pros and cons of moving to a Y.  In that video I ended with an affirmation that I wanted to “cool off” a bit to subdue the impulse buy tendencies that have come around more and more over the last 10 years as I have become more financially robust.  Well by late afternoon the cool down had expired as I pushed the BUY NOW button on the Tesla site for the Model Y.

During the day I was running scenarios and numbers to convince myself that I could upgrade to the latest and greatest car Tesla makes without significantly impacting my monthly budget.  My loan on my Model 3 is the 72 month variety. Because the interest rate on a new loan is more than a point lower now, I can actually do a 60 month loan on the Y with essentially the same payment which was another push in the buy now direction.  I had other factors that influenced me like Cindy being excited about the prospect of a bigger and more flexible car with the hatchback configuration.  So after the BUY NOW button was pressed it triggered a long series of required actions.

I had to complete two extra steps on the Tesla site that I had not needed to do when I bought the Model 3, credit application and the trade in details.  When I bought the 3 I had no trade as I gave the Prius to Katie and I self financed through my credit union.  This time Tesla’s finance rate is actually better than the credit union and I am trading a car.  The additional hoops I had to jump through were not major and had all requested documentation uploaded by last night. On the web site it says typical wait for a Model Y is 2-6 weeks however a local Tesla sales rep told me they had a car with my specs in inventory in Fort Lauderdale, meaning I could take delivery in 2-3 days instead, sweet. 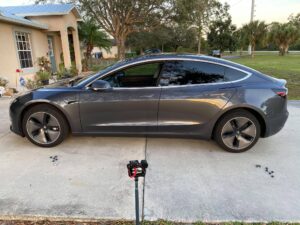 When I got home I started on the de-modding process of the Model 3 which started with putting the wheel covers back on.  I have a bunch of other things I will be reversing and removing.  Some of the stuff I can reuse in the Model Y, some of it will be given away or sold.  I had a bit of remorse as I started the work, which I filmed of course.  The Model 3 truly has been my favorite daily driver I have ever had in my life.  It’s crazy that almost two years has already passed since I bought it.

I do look forward to the Model Y for sure.  It’s higher profile, hatchback flexibility and slighter larger dimensions are all things I will appreciate.  It should be simply adding on to all of the things I already love about my Model 3.  I did chose to drop full self driving on the Model Y although it still has autopilot which is what I use the vast majority of the time.  If I want to add FSD back in when it is truly ready for prime time, I can, for a price of course.  The Y is Pearl White which looks good for sure.  I don’t know that it is as sharp as the Midnight Silver of my Model 3 but it also won’t look as dirty as the 3 either.  That paint color shows every speck of dirt/dust.

Hopefully by the end of today I will have a clear picture of exactly when this transaction can occur.  Because the Model 3 is now officially involved in this transaction I thought it best that it remains safe in the garage until the transfer takes place.  I am driving Cindy’s Ioniq today and she is using my Tacoma.

Last night Cindy, Katie and I had another funny VR session, this time by hanging out in VR Chat for a couple hours.  Katie had said she was in the app herself for a couple hours the night before so she now had a better understanding of the world.  The interactions with the other avatars was once again hilarious.  There are of course a few random idiots but they are easily handled with a click on the BLOCK USER option which makes them disappear from your virtual world forever.  The funniest part of the night was when we were on the rooftop of a building that had various things for entertainment, including a big game board on the floor.  Katie assumed the role of activity director leading a group of about 10-12 people through a few different games.  I was laughing out loud repeatedly. This was Cindy’s deepest dive into VR chat.  Watching her interact with the mostly adolescent kids in there was entertaining as well.

We played so long that both Katie and Cindy’s headsets ran their headsets to almost dead.  I have the extended battery pack on mine so I could have gone for another two hours, not that I wanted to as it once again was very late by the time we got out, around 11:30PM.  I am pretty sure we will be getting more VR on over the weekend.

Speaking of the weekend, I need to keep my plans flexible depending on what Tesla comes back to me with.  Other than that normal chores await with a side menu of lovely predicted weather.

Ted Cruz couldn’t be any slimier, could he?