Both Cindy and I busted it for a good portion of the day Saturday.  Cindy took care of mowing the front and far back sections of the property while I tackled a long overdue project, completely cleaning out the big shed.  I have half assed done it a time or two but the last time I pulled everything out and really cleaned it may be four years ago at this point.  It was a particularly gross job this time around due to the palm rat issue we have had the last few years. There was tons of rat shit pushed into the corners which only got exposed when everything was pulled out.  There was also rat excrement on boxes and fabric we had in there for frost covering, all that got thrown out.

It was a good way to cleanse and purge the space.  I hauled two truck loads of unwanted things to the curb.  A surprising amount of it got reclaimed by passersby in the next few hours.  I have a decent amount of unused storage space in the shed now and it will hopefully stay that way.  I plan to be more selective about what I decide is worth keeping or not down the road.  The work took over three hours.  My lower back was badly sore by the end of it as my Advil had worn off.  Aches and pains are just a fact of life at this point.

Cindy and I went out to dinner for the third weekend in a row,  this time to Burgerfi.  We were amazed when we entered the place and there were NO other customers inside.  Cindy was actually amicable to eating inside under those conditions, the first time we have done so in probably a year.  Of course once we sat down a few other people showed up and did the same, it was fine.

On Sunday after running errands in the morning I spent a good portion of the afternoon installing mods and then another couple hours editing the footage from it.  One of the devices I tried to install, a USB hub that increases the amount of ports available did not work as expected so I need to find out if it’s defective or not.  I also messed up my screen protector install a bit but it’s good enough that I don’t care to redo it. 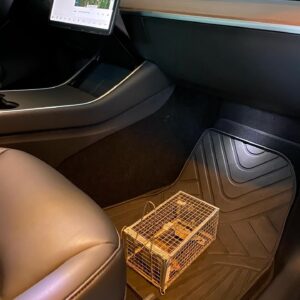 Since the shed was freshly cleaned I had the live trap out there Saturday night just to make sure there weren’t any new rodents hanging out.  The trap was empty Sunday morning.  I decided to place it in the chicken run last night because I had seen some stray rat shit here and there recently.  When I went out there this morning the trap had a resident in it. We took a ride together in the Model Y on my way into work where he got released into a remote area where he can hopefully live his palm rat life without being a nuisance to others.

We are T-4 days until my second colonoscopy takes place.  I just want to get it the hell over with.  My hope is knowing what to expect this time around will make it slightly less miserable.  It’s good to have hope, right?