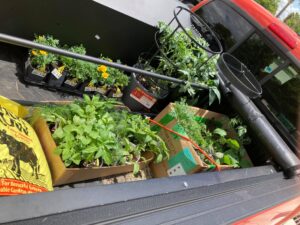 When I was working all of those Saturdays at our branch offices I started doing the weeding on Friday evenings.  I didn’t do that this week and found myself annoyed Saturday when I needed to complete the task before going on a coffee run.  We had a big errands list, first hitting Tractor Supply where I got chicken stuff as well as an unexpected purchase of another raised/moveable planting bed for our refurbished garden area.  We then headed over to Lowes where Cindy loaded up on plants for the garden and I grabbed some stuff to relocate/change one of the sprinklers.

After eating lunch I began working on the three main tasks I wanted to accomplish.  First up was the sprinkler work.  I wanted to move one of the sprinklers that was at the old boundary of the garden about 10 feet closer so it was in range of the new boundary.  I also wanted to change out the rotary sprinkler to a stationary pop up sprinkler which gives more concentrated water to the area.  Finally, I added a two foot riser so the water was easily able to clear the higher walls on the new raised beds. 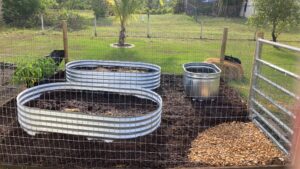 It was a decent amount of labor, carefully digging up the existing sprinkler, removing it, and then attaching a 10 foot section of buried funny pipe which I attached to the new riser/sprinkler.  I fired up the sprinklers in the area to verify we had decent coverage, which we did, before I back filled everything and tamped it down.

I next headed into the garage to work on replacing the failed UV light in the air handler.  I was able to open up the air handler pretty easily and removed the burned out bulb.  I cursed out loud however when I unpacked the replacement bulb I bought on Amazon to find that it was not the right one, despite the description for the item matching up.  So I put everything back together and ordered the correct bulb from another site, as I was not able to find it on Amazon.

My final task was changing the oil and filter on the Husqvarna tractor which just crossed the 50 hours of operation milestone.  The task went fine although I should have taken a different approach when removing the oil filter.  My method resulted in a massive oil spill which could have been avoided.  Other than that, I was able to complete task number three.  I wasn’t thrilled with only hitting .666 on my to do list but you can’t win them all.

Deb came over Saturday night.  I grabbed us some food at Lil Apetito for us to enjoy while we watched Richard Jewel (I’d give it a B).  When the house phone rang during the evening (which we never answer), I noticed the caller id said Lil Apetito.  I checked the voicemail and they were calling to say they had my vaccination card.  Evidently when I paid for the food the card slipped out of my wallet without me noticing.  I felt very fortunate they made the effort to contact me since I get vaccinated the second time this week.  We called back and made arrangements for me to pick it up on Sunday.

Sunday after paying bills I headed out to go ride the abandoned golf course again, this time with my OneWheel XR and KingSong S18.  I wanted to contrast how the S18 felt versus the V11 which I brought there two weeks ago and also contrast the riding experience of an EUC to the OneWheel in that environment.  I had a lot of fun cruising the course which I basically had to myself.

Katie dropped off DJ for us to babysit during the afternoon.  Daniel and her were going to work on erecting the shed they had bought over a year ago.  They recently had a concrete foundation poured for it.  Watching DJ is not an easy task as his short attention/interest span has him constantly on the go, looking to interact with whatever he can get his hands on.  Cindy and I tag teamed it as best as we could.  Later Cindy had the idea of taking DJ with us to go get late day coffee as he likes riding in the Tesla and also car rides often put him to sleep.

We extended the drive after getting the coffee to allow the car to work it’s magic.  DJ did actually fall asleep, so much so that he was snoring at one point.  When we got home Cindy tried to transport him inside without waking him up, unsuccessfully. We took him back to Katie’s place around 6:30.  The kids had gotten the walls of the shed erected. I started helping with a few things and before I knew it I was fully involved in getting the roof installed.  It was probably the ideal outcome because I think Katie would have struggled with some of the things that needed to get done to get the roof in place. When we were done the shed was almost complete with a roof and the doors installed.  All that remained was adding some door hardware, securing the floor to the slab and doing a round of final fastener tightening.  They appreciated the help.

It was dark when we left and we still hadn’t eaten dinner.  Cindy suggested we pick food up at Culvers.  We enjoyed it at home but as soon as I was done eating I hopped on the computer to finish up the long video edit.  I didn’t hit the mattress until almost 11:30.  It worked out to be a fun weekend with a pretty balanced mix of work and non-work activities.