I had mentioned yesterday was DJ’s birthday and how I was sad that I didn’t think I was going to get to see him on his big day.  However when I got home the sadness was averted as I saw Katie’s truck in the driveway.  It’s funny, it used to be when DJ would first see me he would come over and want me to pick him up.  Now he has a more subdued almost shy response at first although he will say Pop Pop non-stop.  It didn’t take long for the fun to start however. 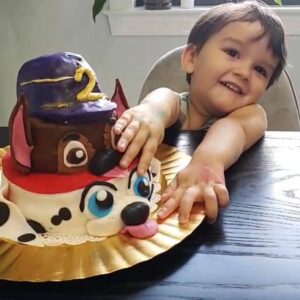 DJ came out to the chicken area with me as I tended to the birds.  We then spent some unexpected pool time together.  Cindy and Katie thought the water was too cold but I jumped in and splashed around with DJ for close to a half hour I bet.  They were at the house until after 8PM which was nice.  It always makes me sad when I say goodbye to DJ when he is in his car seat.  He points to an empty seat and says “sit”, meaning he wants me to come along with him.  When he realizes that isn’t going to happen the tears start flowing, poor little guy.

So I put in to take off next Tuesday and Wednesday, extending my Memorial Day weekend to a pleasant 5 days.  The weekend after that is our trip to the Kennedy Space Center, meaning I won’t have to work a full week until mid-June.  For this upcoming weekend the big project I am targeting is not house related but EUC related.  I have a new rim/tire for my Veteran Sherman that I would like to get installed.  It is going to require a major tear down of the wheel that will likely consume half of a day, good thing I have five of them off.