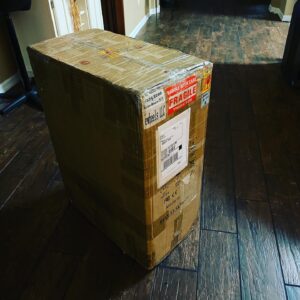 In the last video I made I was riding my KingSong 16X.  During that video I briefly mentioned that when the Inmotion V12 came out I would likely sell my 16X since I don’t need two 16 inch wheels.  That simple mention brought about 4 or 5 inquiries asking me if I wanted to sell my 16X now.

I responded to a guy that asked me what I would want for it.  I gave him a number and he offered $100 less than my number but said he would pick it up in person since he lives in Miami.  I agreed but the guy said he didn’t want to get the wheel until July so he sent me a $100 deposit to hold it until then, no problem.

In the span of 24 hours, picking it up in July had changed to he could get the wheel now if I was willing to ship it to him, with him paying the shipping cost.  I have shipped a number of wheels over the years and I always keep their original box so I told him that would be fine as well.  I dug the box out of the small shed last night, put the wheel in it, weighed it and then got the shipping estimate which I sent to the buyer.

Within a couple hours I had the remainder of the funds in my Paypal account.  I sealed up the box, slapped a shipping label on it and dropped it off at a UPS Store on my way into work, completing the transaction.  It’s funny how this came out of basically nowhere, by a simple statement of future intent in the video.  Now all I need is the V12 I spoke about, unfortunately I have absolutely no ETA for that happening.  The good thing is I still have 7 or 8 other PEVs to keep me occupied until then.