On Tuesday Cindy and I went to ride at the abandoned golf course.  I brought three PEVs, the Minipro, the OneWheel XR and the Backfire Ranger X1, which has not been ridden in 2021.  I started out on the One Wheel while Cindy rode the Ranger.  She was very cautious on it at first as it had been a long time since she rode the skateboard. After maybe 15 minutes or so she was more confident.  The large rubber tires on the skateboard made on and off path riding possible.  We then switched up with Cindy on the Minipro and me on the Ranger.  I had not ridden the X1 in a looong time but it did not take long until I was able to traverse the paths at a reasonable speed.

Cindy enjoyed the varied terrain and the mature trees.  She stumbled across an amazing find, a large tree that had become encased in a dragon fruit plant, a cactus looking vine.  We pulled a couple plants that had rooted near the base of the tree to see if Cindy could propagate them.  It was an enjoyable ride for sure, I didn’t even have to bring a video camera with to prove it. 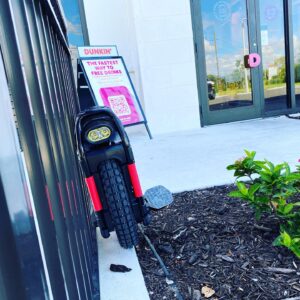 I was excited because I supposedly was going to have a new wheel delivered yesterday.  Unfortunately when I checked the FedEx tracking I saw the box was sitting in Nashville all day so that didn’t happen.  Instead I had one of my lazier days on record.  Sure I did all the chicken maintenance and took a ride to the nearby DD to test out the end result of all of that mod work on my Sherman, which thankfully seemed to be all good.  I also set up yet another Ring cam inside the chicken coop.

I now unplugged the DVR out there and will be pulling the system completely out.  The system had 3 cameras out and was no longer viable to be checked away from home since the UI is insecure and a target for hackers.  I would need two more Ring cameras to give me the same coverage I had on the DVR ( when it was fully operational)

So other than those items listed above I did a lot of loafing.  I watched some shows, played some WoW and hung in VR.  I also watched Army of the Dead on Netflix, an entertaining and gory Zack Snyder interpretation of the zombie apocalypse. It was silly, mindless entertainment, enough for a B+ in my book.

Doing that much relaxing was a bit uncomfortable for me, as weird as that may sound to many.  I have a mini two day work week followed by another extended weekend for our visit to the Kennedy Space Center, a sweet schedule for sure.