The new spotlight I installed in the chicken yard has really helped me with early AM cleaning duties.  It’s so bright that even the chickens are willing to step outside a little bit instead of being still like statues in the run.  I have been able to be back inside making breakfast a couple minutes after 6.  Things went pretty smoothly this morning, I was out on the road by maybe 7:10am, early enough to get to work on time, normally. 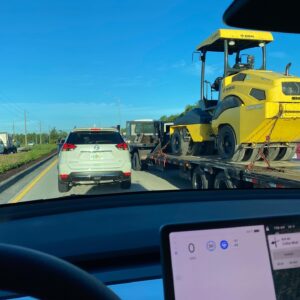 I was maybe 10 miles into my commute when I hit backed up cars.  After determining things were moving at a snail’s pace I made the command decision to backtrack 7 of those 10 miles and go down Immokalee Road.  Almost like it was planned, as I approached Immokalee I saw multiple emergency vehicles going past, bringing traffic on that route to an absolute halt as well.  I was very frustrated as you can imagine.  The commute wound up taking me an hour and a half.

I forgot to mention that on Friday for the hell of it I submitted my NEW Tesla Model Y to Vroom for an appraisal number.  I had no intent of actually selling it this time but I was curious if Vroom was still buying Teslas for more than they cost new.  The answer is, yes. 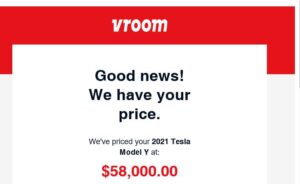 The list price on my second Model Y was $52900.  The Vroom straight buy came back at $58,000, $5K more than the list price of a new Y.  However when you allow fiscal reality to creep in, adding Tesla’s $1200 destination charge, tags, and sales tax in, there is no appreciable gain to be had in this scenario.  However the old rule was the second you drove a new car off the lot it lost 20% of it’s value is certainly no longer the case, at least not in the Tesla universe.