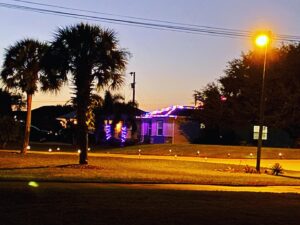 Last night I saw the neighbor two houses down already had adorned his exterior with Christmas lights.  A number of developments around here already have their holiday displays up as well.  Heck I even saw the neighborhood DD had their roof line lit up on the drive home last night.  Hey I like holiday light displays, this is the guy that in the past has left his lights up until mid-January once or twice.

I actually am going to be putting my decorations up, at least some of them this upcoming weekend, which would be the earliest I have ever done it.   Typically I do it during the extended Thanksgiving weekend but since I will be in Dallas visiting my sister’s family I determined I would rather be early than late.

It’s an odd situation because I have no idea what my Christmas this year is even going to be like.  It’s questionable how much effort this holiday season really requires.  I was thinking about the only Christmas I had during my one year of mostly singletude back in 2012 and tried to remember how that blueprint worked out.  I think Christmas morning was just myself and my mom although I think Ali may have been over at some point, I can’t quite remember.  The 2021 version is not going to be what I have become accustomed to, that’s for sure. So the point is, I will be putting up decorations this weekend, I’m just not sure which and how many.

I have moved my alarm clock back an additional 5 minutes this week, now getting up at 5:35 AM instead of 5:40.  I have consistently been getting to work 5-10 minutes late since I started doing chicken chores in the morning.  The alarm change is an attempt to fix that.  Getting up only 5 minutes earlier shaves around 15 minutes off my arrival time at the office.  The reason for this is the earlier I get on the road, the less traffic is congesting it.  That extra 5 minutes saves me an additional 10 en route. I should have done this earlier, pun intended.

Today would have been my Mom’s 74th birthday, which serves as another sad reminder of her early passing.  I wonder how she would feel about how the events of my life have transpired to this point.  I definitely see more and more parallels between her path and mine.  If I allow myself to dwell on thoughts about my mom much it makes me sad, really sad so I don’t do it.   I follow that strategy with a number of things.  When you keeping moving at fast pace the things in your rear view mirror remain mostly a blur.