Cindy stopped at the house yesterday to do a couple things.  When she went in the garage she was shocked to see what at first looked like a dead baby bunny on the garage floor.  When she got closer she saw the rabbit was not dead but it didn’t look good.  I told her I had seen a very small rabbit hanging out by the chicken coop recently as well although I did not think it was the same one, at first.

Cindy got one of the small animal carriers and put the poor little thing in there with some food and water.  I was afraid I would be burying the animal when I got home.  My theory was it went in the garage and then got locked in there, cut off from a food/water source.  My hope level was low.

Later when Cindy stopped back again she was surprised to see the animal carrier was empty, the rabbit apparently moved somehow.  When she left she left the garage door cracked so the baby could escape if it wanted to.  I was still not overly optimistic. I still assumed I was going to find the rabbit dead behind something in the garage.

So when I got home I saw a little ball of fur right outside the garage.  As I moved closer I verified it was the baby bunny! When I got within 20 feet he scampered back into the garage, great….. 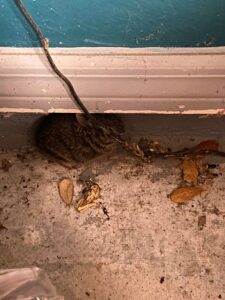 I carefully started pulling things away from the walls, trying to find him/her.  Because of it’s tiny size there were a lot of options for hiding spots.  Finally as I pulled one of the storage bins away I spotted the baby.  I could tell it was weak/tired but it most definitely was not dead.  I was able to get the rabbit back into the animal carrier.  I then took it down to the chicken area, putting out some food and water for it.  I realized this had to be the same baby bunny I had seen last week.

This morning I walked out in the darkness hoping to see the baby.  My hopes were answered, it scampered away once I got close but it seemed clear that food and water was consumed.  Hopefully the baby is in the clear for now although it’s tiny size makes it still vulnerable to a number of predators.  I will do my best to keep an eye on/protect it the best I can.  It’s cute as can be.  I felt fortunate to have a happy ending to what looked like a very sad story only a few hours earlier.