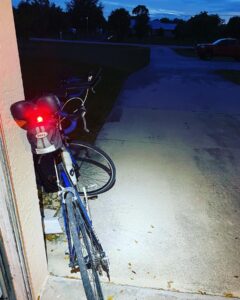 Friday evening was the first time I did ride my after work in full daylight savings time conditions, meaning, it was dark.  I turned on my bright tail light as well as my helmet mounted light torch.  I don’t get to the street light section of the road for about the first half mile of the ride.  That is all that it took for me to identify a couple issues.

The angle of the light on my head was not good.   Even if I tried to crane my neck up abnormally high, only the 5 or 6 feet in front of me was illuminated.  The other issue I quickly experienced was having a bright light on top of your head is a beacon for bugs, inviting them to smash into your face/mouth repeatedly.

Once I got to the street light section visibility was better but still not great, making it very difficult to pick out small debris in the bike lane that I would normally try to avoid in daylight conditions.  As I got about a mile away from the turn around point I realized that the street lights do not extend all the way to Everglades Blvd like I thought they did, plunging me back into terrible visibility conditions.  I did a lot of relying on cars headlights to help me survey ahead.

Not being able to see reliably of course meant I had to reduce my speed, there was no way to sink myself into the aero bars and just pedal hard, I had to make sure I could see what I was doing, at least a little bit. 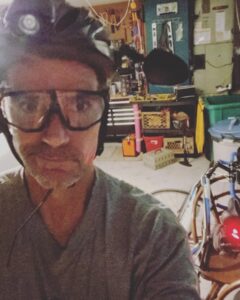 One thing that did work well was my new cycling glasses.  The clear lenses combined with higher profile kept the top of the frame out of the middle of my field of view.  I pulled back into the driveway intact.  I wasted little time until I bought an alternative light mount for the bike.  I am going to mount it lower, on the handle bars, allowing me to adjust the throw more reliably and give the bugs a lower target to aim for.

Friday night I watched Red Notice with Ryan Reynolds, The Rock, and Wonder Woman.  It recently came out on Netflix.  I found the movie filled with action, laughs, and not a single glance at a clock.  The chemistry between all three main characters was really good.  I’d give the movie an A all day long.

Saturday after getting normal chores done and running errands with Elsa in tow I dug into things that needed to get done, in my mind, before my upcoming holiday road trip.  Although the grass had hardly grown in some sections I mowed it, partly because I was planning to put up outdoor ornaments afterward, which normally is best done right after mowing.

Putting up the stuff did not have the affect it normally does.  Ever since I was young kid I have loved Christmas.  When I was a kid a lot of that was immature greed, excitement about what I could potentially get.  As I became an adult the holiday has meant a lot more giving than receiving, and I like it that way.  Putting up decorations was always fun as it signaled the official start of this month or so where the world seems just a little bit better. Every Christmas except one for the last 36 years I was in a relationship so whomever the person was, I got to share my hard to explain child-like excitement for the season.  I knew that trying to muster up the spirit to decorate was going to be difficult and painful this year, I was unsure just how deep it would go.

I went pretty bare bones by my standards on the outside of the house, decorating the first two palm trees and the face of the house with my LED light objects, most of which are 4-5 years old at least.  I made a command decision to throw out the collapsing snowman.  His cheap metal frame had broken at a bunch the welds which would have made him very flimsy.  I also decided to not bother putting up the Santa sleigh inflatable.  The reindeer never stay upright for long and I just didn’t feel like messing with it every night to make it look semi-decent. 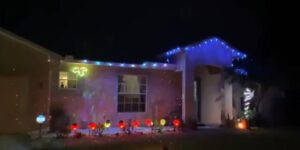 As I was walking around doing the stuff I couldn’t help think back and contrast the 2021 display with some from the past where I would go all out, hanging every strand of light I had, illuminating all palm trees out front, the sides of the house and even the fence line.  I thought about my state of mind then and compared it to now in the process.  Back then there was seemingly endless good energy in many aspects of my life.  Now it feels like a dark alley with a couple flickering street lights.

I decided I only had the motivation to get the outside stuff done Saturday.  Even with the somewhat lame display I was out there for over a couple hours.  I would do indoor things Sunday.  Saturday night I spent a good portion of the night playing WoW, trying to distance myself from the sadness I was feeling.

Today again after tending to the chickens, paying bills, and doing a short errand run I dug into doing the indoor stuff.  Based on how I felt yesterday I was expecting similar difficulties getting through the process.  I made the decision early that I was not going to put up two trees, the second being the tree my mom owned when she passed away.  The tree will remain safe and sound in the shed but I just did not have the will to go through setting up a second tree.  Hell I was struggling to not just say fck putting up the tree altogether.

I cleared the customary spot in the dining room and put the three sections together.  I did very little fluffing/straightening of branches, that was always Cindy’s thing.  So not only was I hanging ornaments, I was dividing assets at the same time as there were a number of Cindy’s ornaments, many of which she is very fond of.  I carefully separated her things and only hung stuff I knew was mine.  Anything questionable or just unwanted stayed in the box.

Many people find it hard to believe that I am sentimental based on the stoic almost cylon-like at times outward appearance I carry.  I have ornaments dating back to my first wife.  I never threw them out because somehow despite the passing of that relationship, the ornaments each are like a miniature time capsule.  When I pull them out I instantly replay their back story which is always based around a happy moment in time, not a sad one.

Well doing this with ornaments based on my various adventures with Cindy was really, really tough, starting spontaneous tears more than once, something that has not happened in quite awhile. It made the process of decorating the tree a time of sadness instead of joy, and I hate that.  I know the only eventual cure is the passage of time and the first holiday post split is always going to be the worst but still, I really understand now the people that say that the holidays are some of their least favorite time of the year.  Hopefully I don’t every mutate into that mindset permanently.

This afternoon I will watch the Eagles game while I start to gather my thoughts and items needed for my road trip that begins Wednesday afternoon/evening.  I have a lot of boxes to check off.