Last night I did as much trip prep as I could, getting my suitcase mostly packed and the house in order.  It felt weird knowing that 24 hours from then I would be driving north with a hopeful destination somewhere up in the panhandle followed by a nearly all day driving session on Thanksgiving.   It will be a grind for sure, especially with me still trying to get over the cold that settled in Saturday night.  I have not been sick for nearly two years, the timing is (not) perfect.

It sounds like my sister is creating a busy agenda for my 3 day visit.  I’m sure it will pass by quickly.  Tomorrow is also my niece Emily’s birthday.  I have never gotten to spend a birthday with either of them in person so it will be a nice treat to do so.  A quick look up in Google indicated it is an 18 hour plus drive non-stop, meaning with all things considered and the supercharger stops I will likely be spending 21-22 hours driving, a tough challenge for two days when healthy with a co-pilot. Solo and semi-sick will up the challenge level a few clicks. 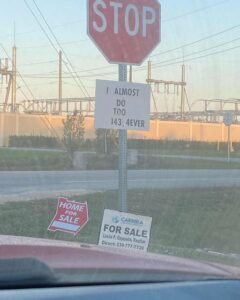 This morning I took the truck to work so the Tesla could remain at full capacity for the trip.  As I got to the intersection of my street I saw a sign that was unexpected.  It said ” I almost do too   143 4Ever” It was an odd place for such a sign.  The message seems to be indicating some sort of romantic break up, like a couple was going to get married and then didn’t.  The 143 4Ever would be confusing for most people but I actually know what that means thanks to the Stern show.

Years ago one of the staff members was telling a story a about his wife who he suspected was cheating on him.  He saw texts she sent to a man that included the numbers “143”.  He later discovered that is texting code for “I love you” with the numbers representing the amount of letters in each word.  Because of that story, I was able to translate the sign.

I am taking my video/camera gear and laptop along for the ride as I hope to document the journey in a similar fashion as when I took the Model 3 to PA.  It should be a unique adventure and the first time I have crossed the Mississippi River in at least 5 years.