Despite the property already being inundated Mother Nature once again let loose with her fury last night, dumping another huge amount of rain in a short period of time.  The degree of frustration I feel when I walk out into the lake which was once my back yard is immense.  Once the rain stopped I was able to go out and check on Kathy.  Evidently she did not have the energy to get up into the coop for shelter.  Instead I found her standing in the run, soaked.  I felt terrible.  I put her in the coop where she immediately went and laid down in her nesting box that I filled with fresh shavings.  She is getting very weak and feels incredibly light compared to how she used to be.  I keep trying to pamper her any way I can, surrounding her with treats she has always loved.  Unfortunately her interest or ability to eat them is severely limited. 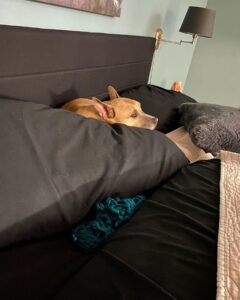 Last night when I came back to shower during halftime of the Eagles game I found Elsa had dug herself into the pillow area of my bed.  At one point of her life she would have been scolded harshly and chased away.  I didn’t care and left her there, looking as cute as you can imagine.  She is back to flying solo as Don picked up Lucky yesterday.

Speaking of the Eagles game, they put on a hell of a performance last night.  Unlike week 1 where it was all offense and no defense, the Eagles held the Vikings in check, winning convincingly 24-7.  The team performance was a double positive for me as I have three Eagles on my fantasy roster.  Jalen Hurts pretty much single-handedly won my fantasy game for me, which I was trailing badly in at the start of the night.  It was a great win and hopefully is indicative of good things for the Birds this year.

So I got the results of my follow up blood test.  There was no mention of the PSA test this time, which I was glad based on the false alarm the prior results seemed to indicate.  However the CEA test clicked up 3 tenths from 3.5 to 3.8, not what I was looking for.  The fact that it went up made me agreeable to the proposed next course of action, having a chest and abdomen CT done in 10 days.  In the remote chance that there is something going on, I would be stupid to not have these relatively simple tests run to rule out anything nefarious going on.  I still feel confident I am fine and I am moving forward as if that is the case.