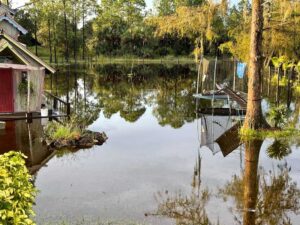 Last night I actually pulled into a dry driveway for the first time all week.  It isn’t just my imagination that the amount of rain and standing water we are experiencing right now are among the worst of the last two decades.  I happened to get a notification of a NextDoor thread of dozens of people in my area complaining about the same thing.  There were multiple long time residents saying this is about as bad as they can remember.

The problem lies in the half assed drainage system out where I live which basically does nothing.  All properties are supposed to have drainage ditches in front of them which are the lowest point in the yard.  If there is a house on a property there are culverts that allow the water to pass under the driveway.  This network of ditches are all supposed to drain into the canals the Army Corp of Engineers created in the 60’s to drain the area.  Well they don’t work for various reasons, mostly because they are not maintained by the county.  The end result is water piling up to insane levels.

I went out and checked on Kathy.  It looked like she ate some of the berries and tomatoes I put down.  She wasn’t better but didn’t seem worse either so I guess that’s good. When I came out to put her to bed she had already made her way up into the coop and was laying in the nesting box.  So about 6:45 I looked at the sun outside and decided I needed to take Elsa over to the park and walk.  The flooded property has meant walking her around the backyard has been a no go for a week. 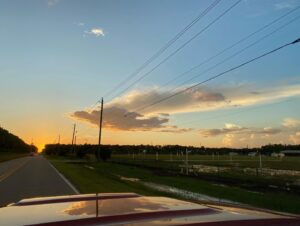 It’s amazing the amount of fear she has when we first get there.  When I am trying to put her leash on in the back of the truck she shakes uncontrollably, despite my taking her to the park dozens of time. She knows it’s no big deal yet this is her reaction every single time.  The other side effect is near instantaneous pooping when we get out of the truck.  Last night she pooped, I picked it up and threw it away and then 60 seconds later she pooped again, unreal.

Despite her initial fear we had a nice walk.  I stay on the very outside boundaries which gives Elsa long stretches of limited scary things like children or loud noises.  The park was very alive last night, there was softball, soccer, and football all going on simultaneously.  I feel very fortunate to have such a nice facility so close to the house.  I caught this pretty sky driving out of there.

I still have not booked my flight to LA for the EUC tour.  With the CT scan coming up I feel I need to know those results before booking any travel plans.  Kathy’s status also plays into my trigger finger being on the slow side.