Last night and this morning felt very different.  The absence of the night time “putting the chickens to bed” routine felt weird.  When it got dark the thought flashed in my head for a moment how I needed to go out to the coop, just like it has for the last 8 years or so.  I then realized that is no longer the case.  This morning was even weirder.  For the past year I have been marching out to the coop at 5:30 in the morning to get everything done before leaving for work.  Today I was able to sleep an extra 25 minutes and still get to work on time which is a net positive for my overall quality of life.  There is going to be a lot of adjustments to the new state of things but if I am being honest, it will be a good thing overall to be able to live my life without the chickens being at the forefront of many decisions. 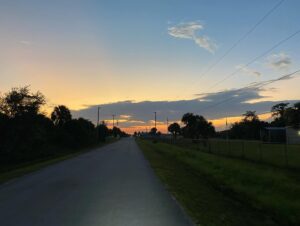 After dinner last night I felt like going out for a ride on a wheel.  I grabbed my S22.  No camera gear was included, I just wanted to get out to clear my head as it had been an emotional day.  After cruising around the side streets on the other side of Immokalee Road I headed into the park entrance.  It was pretty dark at this point.  I had pulled off the road to check something on my wheel.  When I was ready to go there was a line of 5 or 6 cars coming so I waited for them to pass.  So as I am ready to pull out I all of a sudden barely see another vehicle, some old shitty Honda with no lights on.  The exit road has absolutely no street lights so the guy was almost invisible.

So as I pass him I see his window is down and say “Turn your lights on dude…”  Without a split second notice the guy yells “f u” and other things I couldn’t make out as I was rolling away.  I thought to myself how this individual must be highly educated to lead with obscenities when he was the one that was driving lights out.  Sure if I replaced “dude” with something like idiot, asshole or another similar insult, I could understand the flash anger response but as is, it was dumb.  As I kept rolling I checked my rear view mirror to see if Mr FU would be dumb enough to turn around to pursue things further.  He wasn’t.  I’m not the type to initiate aggression but if you place it on my doorstep things might not turn out the way you hoped.

The predicted storm path is still tracking west of our area but there will likely still be significant impact to much of the state.  The biggest concern here is potential storm surge since will be on the east side of the hurricane which is the business end.